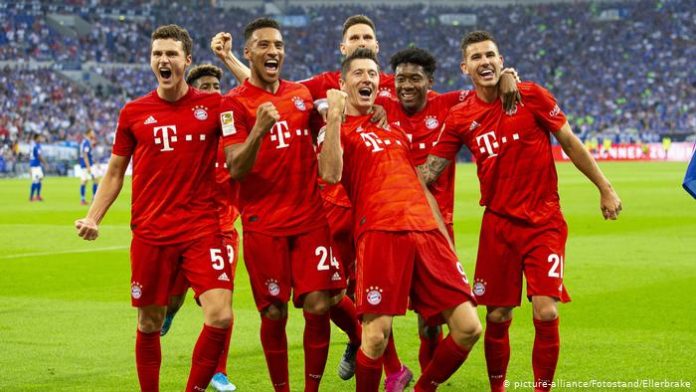 If it helps, though, Daily Mail GH has compiled videos on your favorite European clubs that should help cheer you up until the novel coronavirus disease (COVID-19) pandemic eases its grip, the stay-at-home order is lifted, and football returns. Today, it’s the turn of Germany’s Bayern Munich.

Four times have European clubs celebrated a ‘proper’ Treble since Manchester United first made the concept fashionable, and German Jupp Heynckes masterminded one of the more memorable in this century during the most successful of his four stints at the helm of Bayern. Here’s how he plotted conquest of Germany and of Europe.

Thomas Muller is brilliant in a manner that confounds most football fans. He hardly stands out on the pitch, but it’s really off the ball — in his unique, almost customized role for club and country as a ‘raumdeuter’ – that Muller’s excellence becomes apparent. Enter that German term — generally defined as a ‘space interpreter’ — into a Google search box and it’s the 30-year-old who shows up. Find out why.

3. TALE OF A CLASSIC

No club quite measures up to Bayern’s domestic might, but, in Borussia Dortmund, there is a more-than-decent rival. Between the pair are 37 Bundesliga titles (Bayern, of course, boast the greater portion), as well as decades of thrilling history. What makes Die Schwarzgelben, at least in Bayern’s eyes, such special opponents?

Bayern’s Robert Lewandowski is no miracle-worker, but it would have been tough to convince fans of that fact after, in just nine minutes, the Pole came on to score five times and rescue Bayern from a losing position against Wolfsburg in September 2015. Here, in full, re-live Lewandowski’s incredible performance.

You’ve heard it all about Alphonso Davies: born in Ghana to Liberian refugees, migrating to Canada with his parents at age 5, and going on to enjoy a career in professional football. These days, Davies is a devastating force for Bayern — ask Chelsea fans — and is set, quite clearly, to step up into world-class realms. His story, told here, is quite compelling. Be inspired.