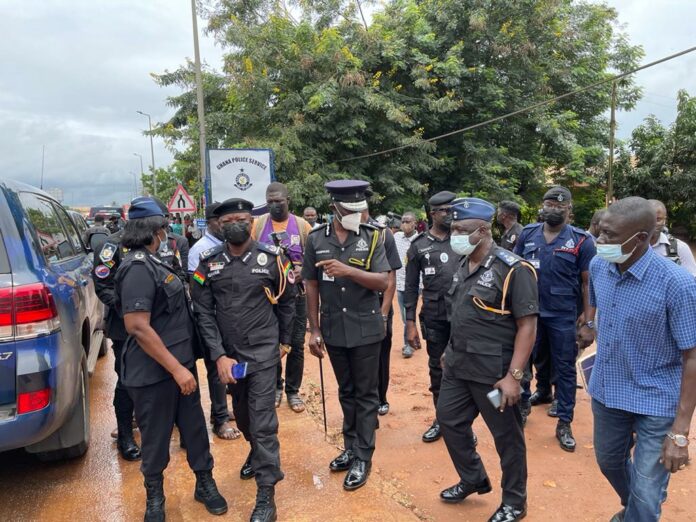 Another suspect has been arrested in connection with the gruesome killing of three people at Alaska, near Abesim in the Sunyani Municipality of the Bono Region.

Superintendent Alexander Kwaku Obeng, a Director of Public Affairs at the Ghana Police Service gave the update to reporters when the IGP visited the grief-striken families Sunday.

“Two suspects are in our custody, one you are aware of…the second one’s name is withheld”, he said.

“They need to be supported psychologically”, he added.

The discovery of three human remains in the home of the suspect Richard Appiah, 28, has shocked residents of Abesim.

A police incident report published online revealed that the suspect, on Friday, August 20, went out with his stepfather’s son and never returned. He was subsequently arrested on suspicion of knowing the whereabouts of the deceased.

“Police together with the complainant [name withheld] and the suspect proceeded to the house where the suspect resides at Alaska near Abesim. Surprisingly police found the deceased lying in a supine position in one of the rooms.

The Crime Scene Management team led by Regional Crime Officer Supt. Kennedy Adusei and the Sunyani District Commander DSP Francis Humado conducted a thorough search in the house. The search unveiled another dead body having cut into pieces and kept in a double door fridge in one of the rooms”, the report stated.

The bodies of the deceased have been deposited to the Mentukwa private mortuary for preservation and autopsy.

The IGP has since ordered the police CID to conduct a full blown investigations into the incident.