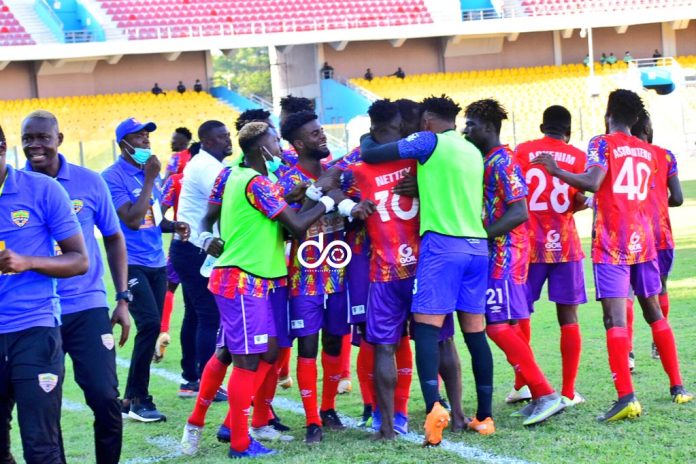 The 2020-21 Ghana Premier League champions dominated the game and showed hunger for the vital win over the newly promoted team who has recently being winning for fun at home.

Former Ghana U20 captain, Daniel Afriyie Barnieh opened the scoring in the first half after just 11 minutes into the game to put the visitors 1-0 up after pouncing on a rebound to grab the opener.

Hearts looked very comfortable on the ball and were hardly threatened by the attackers of the home team.

With eight minutes to the end of the first 45 minutes of the match Rashid Abubakar was sent off for a bad tackle on Kwadwo Obeng Jnr as it ended 1-0 to the Rainbow Boys at the break.

Substitute, AAgyenim Boateng added the second goal to make it 2-0 early in the second half of the match to settle the nerves of the visiting fans and bench alike.

Barnieh grabbed his second goal late in the game to help his side secure a comfortable 3-0 away win to go fourth on the league table.