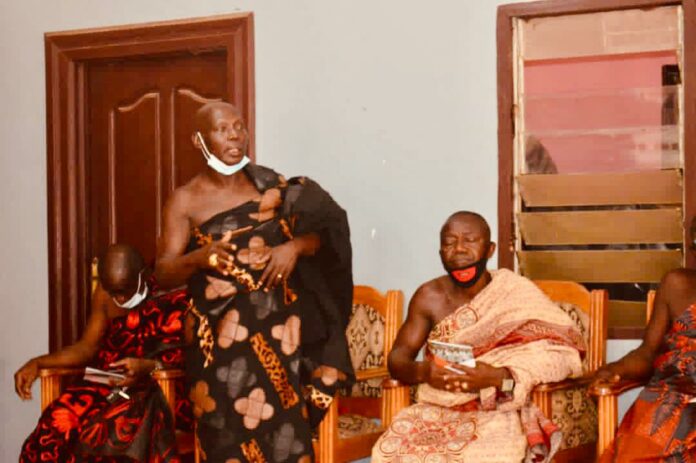 Members of the Adansi Traditional Council on Tuesday, November 10, 2020, benefitted from free legal aid, advice and education from the not-for-profit organization, The Justice Foundation (JF).

The services were provided free of charge.

Executive Director of The Justice Foundation, Dr Kwaku Agyeman-Budu, who is also a Law Lecturer, noted that the rights of many Ghanaians, especially the poor, have been violated because they could not access legal services.

The Justice Foundation, according to the private legal practitioner and law lecturer, is determined to partner with key state agencies and other stakeholders to promote respect for and enforcement of the fundamental rights of Ghanaians.

The provision of free legal services, he said, was one of the measures adopted by the foundation to ensure that the poor and vulnerable got justice.

The Adansihene, Opagyakotwere Bonsra Afriyie II on his part commended The Justice Foundation for the initiative, calling on other known organizations to emulate same.

A participant, shared his thoughts as follows: “This engagement has helped me and I want to commend the Justice Foundation (JF) for enlightening us. Going forward I will continue to engage them in any legal issues”.

About The Justice Foundation

Incorporated in August 2013 as a company limited by guarantee, the Justice Foundation is an apolitical not-for-profit organisation with the sole aim of increasing access to justice in Ghana.

It was founded on the conviction that injustice, howsoever manifested, was unacceptable and should be condemned and eradicated through a gradual systematic approach.