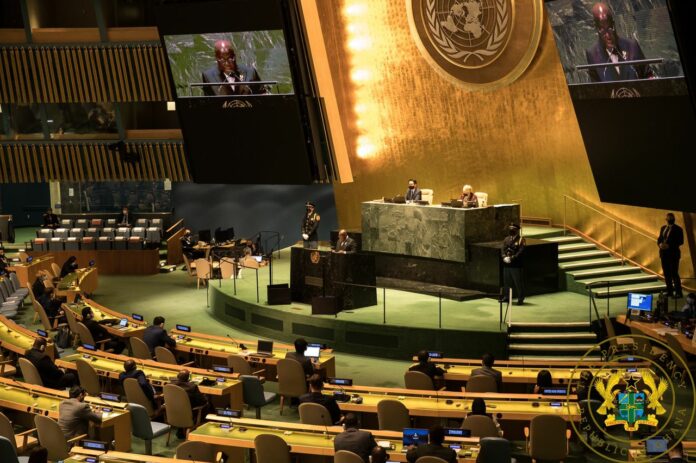 The President, Nana Addo Dankwa Akufo-Addo has called on members of the global body, G20, to as a matter of priority, admit the African Union (AU) into its fold to make the group, G21.

The G20 is an international forum that brings together the world’s major economies. Its members account for more than 80% of world GDP, 75% of global trade and 60% of the population of the planet.

The forum has met every year since 1999 and includes, since 2008, a yearly Summit, with the participation of the respective Heads of State and Government.

Addressing the United Nations 76th General Assembly today the 22nd of September 2021, President Akufo-Addo said it is time for world leaders to consider the repositioning of “key multilateral organizations and international financial institutions such as the United Nations, the other Britten woods institutions and the G20 to reflect inclusiveness, support country investments in global public goods, and ensure fast track financial support to build back better and prepare for future pandemics”.

President Akufo-Addo said, “for instance, the key to the G 20’s effectiveness is that it achieves representative coverage of the global population and economy with a diversified enough number of leaders at the table to enable speed and flexibility in deliberation and decision making”.

“Admitting the African Union to an expanded G21 will have the same galvanising effect within Africa with the EU’s participation in the G20 as within Europe, strengthening policy coordination and coherence across the 54 African economies” Akufo-Addo noted.

With the African Union at the table, President Akufo-Addo stressed that “the group (G20) suddenly will have representation for 54 more countries, 1.3 billion more people, and 2.3 trillion more output”.

“This extraordinary increase and representation will add just one seat at the table and about 10 minutes to the discussion, however, it will redefine global policy coordination to enable a more prosperous, inclusive, and sustainable world to emerge” President Akufo-Addo added.

On the issue of democracy, President Akufo-Addo bemoaned what he said is an assault on democratic governance all over the world including so called advanced democracies. He noted that in the West African sub-region, he as chairperson of the Economic Community of West African States (ECOWAS), together with his colleague heads of state, are doing all they can to maintain democratic governance and rule of law particularly in Mali and Guinea.

“Now more than ever, we must defend democracy, constitutional rule and human rights in the world. In the last 24 months, we have witnessed assault on democracy around the world, sometimes even in developed countries where we have assumed that the consensus of the democratic form of government, had been established” Akufo-Addo said.

“That is why both Guinea and Mali, foundation members of the community, have been suspended from its organization, pending the restoration of democratic governance. We welcome the support of the United Nations to the measures taken” President Akufo-Addo further stated.