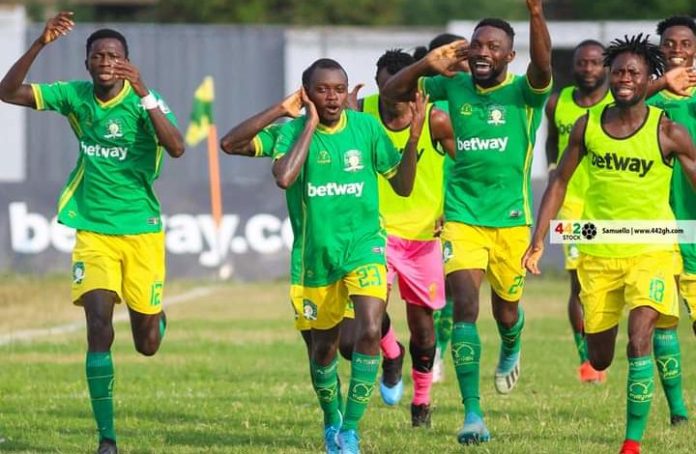 The Ogya Boys who are looking to put pressure on League leaders, Kumasi Asante Kotoko SC pipped the Phobians in a highly competitive game on Sunday afternoon.

Sam Adams’ lone goal was enough to give the home team a deserving 1-0 win over wasteful Accra Hearts of Oak SC team.

Aduana started the game on a blistering pace and got themselves a few decent chances in the first 10 minutes of the match but failed to test Richard Attah who was in goal for the Rainbow Boys.

Hearts grew into the game and started creating chances with good passages of play from the visitors who upped their game after 15 minutes.

Caleb Amankwah thought he had scored the game’s opening goal when he headed Gladson Awako’s corner with venom but only for the home team’s goalkeeper to parry the ball away with a point blank save.

Both teams played a pretty even game, but Aduana took advantage of the situation after Hearts goalie Richard Attah was forced off the field with an injury after colliding with Bright Adjei.

Richmond Ayi came in to replace the injured goalkeeper but he was unable to stop Sam Adams’ drill into the net as Aduana took the lead with a 1-0 score line at halftime.

Accra Hearts of Oak came out of the halftime break determined, attacking from every cylinders but their forward players were not clinical enough to take advantage of the few opportunities that fell their way.

Midfielder, Nurudeen Abdul Aziz should have restored parity for the 2020-21 Ghana Premier League and MTN FA Cup winners when he was afforded space at the back post but headed his effort wide.

The host kept their cool at the back and held on to a first-half goal by Sam Adams to defeat the defending champions at home to put pressure on League leaders, Kumasi Asante Kotoko SC who plays at home at 6pm to Bibiani Gold Stars FC.

The Champions will host inconsistent fellows, Obuasi Ashantigold SC in their next match at the Accra Sports Stadium next Sunday in the week 21 clash.

The GGreen and Yellows, Aduana Stars FC on the other hand will travel up north to Tamale at the Aliu Mahama Sports Stadium to face Tamale United FC who are struggling in the league.

Amidu was set up to fail – Manteaw