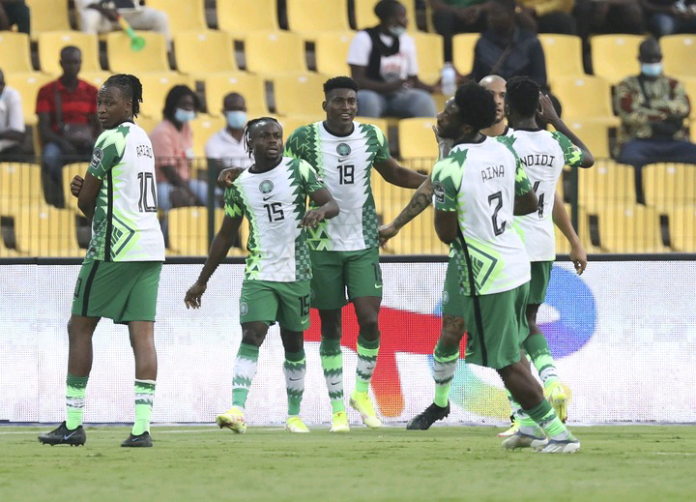 Nigeria booked a place in the knockout stage of the ongoing Africa Cup of Nations tournament with an empressive win over Sudan on Saturday evening.

The Super Eagles took an early lead as early as Samuel Chukwueze converted Moses Simon’s pass on the 3rd minute against Sudan at the Roumde Adjia Stadium on Saturday.

Nigeria continued from where they left against Egypt in Group D game with great display against a waek Falcons team.

Sudan made a quick response on the 7th minute but William Troost-Ekong cleared his line for Sudan corner kick. Sudan threatened the Super Eagles penalty area a bit but could not make much of the insurgence with Yasin Hamed missing a header on the 24th minute.

A perfect free kick was sent in by Kelechi Iheanacho on the stroke of half time with Troost-Ekong’s first header finding Taiwo Awoniyi’s forehead for the Super Eagles’s second goal.

Nigeria added the third just 35 seconds in the second half to make it 3-0 through Moses Simon strike.

Awoniyi nearly grabbed his second goal on the 51st minute but his effort was cleared into corner kick by the Sudanese.

Sudan later in the game pulled a goal back courtesy Walieldine Khidir from the penalty spot on the 77th minute to peg the game at 3-1.

It eended 3-1 to the Super Eagles who book a place in the round of 16.