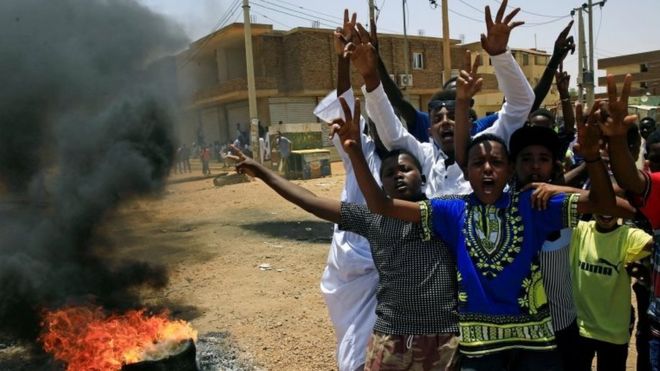 The African Union has suspended Sudan’s membership “with immediate effect”, amid an upsurge of violence in the capital that has seen dozens killed.

The pan-African body has warned of further action if power is not transferred to a civilian authority – a key demand of pro-democracy protesters.

Opposition activists say a paramilitary group has killed 108 people this week, but officials put the figure at 46.

Residents said pro-government militia were all over the capital Khartoum.

The violence intensified on Monday when security forces stormed a weeks-long sit-in outside military headquarters in the capital. It is the deadliest incident since veteran President Omar al-Bashir was ousted by the military in April after months of peaceful protests.

Talks between opposition activists and the ruling interim military council have since broken down.

What did the African Union say?

“The AU Peace and Security Council has with immediate effect suspended the participation of the Republic of Sudan in all AU activities until the effective establishment of a Civilian-led Transitional Authority, as the only way to allow the Sudan to exit from the current crisis,” the AU tweeted on Thursday.

The decision was made unanimously by members at an emergency meeting of the AU in Addis Ababa that lasted more than five hours.

The chairman of the African Union commission, Moussa Faki Mahamat, on Monday called for an “immediate and transparent” investigation into the killings.

The Sudanese authorities spoke out for the first time on Thursday about the death toll, denying that it was as high as 100 and claiming it was “at most” 46.

Doctors linked to the opposition say the figure is as high as 108, and that 40 bodies were pulled from the River Nile in Khartoum on Tuesday.

The deputy head of the military council, Mohamed Hamdan “Hemeti” Dagolo, defended the violent suppression, claiming that the protesters had been infiltrated by rogue elements and drug dealers.

Meanwhile, residents in Khartoum told the BBC they are living in fear, with much of the city in lockdown in the wake of the killings.

Formerly known as the Janjaweed militia, the RSF gained notoriety for brutal atrocities in the Darfur conflict in western Sudan in 2003.