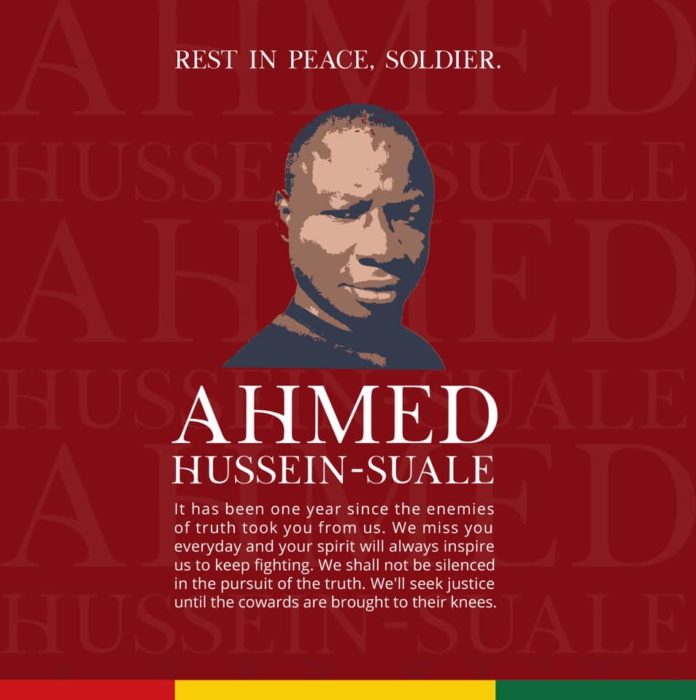 One year after the killing of Ghana journalist Ahmed Hussein-Suale, the International Press Institute (IPI), the global network of editors, media executives and leading journalists for press freedom, expressed deep concern over the lack of progress in the murder investigation.

Ahmed Hussein-Suale, an investigative journalist working for the organization Tiger Eye, was shot dead on January 16, 2019, by unidentified assailants,while on his way home from work in Accra, the Ghanaian capaital.

Police arrested six persons on suspicion of involvement in the killing one month later, but later released all of them due to lack of evidence.

Anas Aremeyaw Anas, the head of Tiger Eye, told IPI in an interview that police had made no further progress in identifying the hitmen or the mastermind. “I am not aware that any new arrests have been made. The police are not pushing too well to find the murderers”, he said.

He added: “Because of the lack of information, it is also difficult to know the exact reasons why the investigation is not progressing the way one would have expected. It can be so because of different events. Sometimes it can be a lack of expertise on the side of the police or inability to identify perpetrators because of information gap.”

“It has been a year since Hussein-Suale was killed but his killers are still at large”, Prasad said. “There has been total impunity in this case. The investigation must be expedited to ensure that the killers and the mastermind are brought to justice.”

Tiger Eye is known for its undercover exposure of corruption and human rights abuses in Africa, frequently employing tactics such as disguises and hidden cameras. In 2018, the year preceding his death, Hussein-Suale was part of a Tiger Eye’s most notable exposé, a documentary called Number 12, which revealed mass corruption in African football just prior to the World Cup.

The revelations of the corruption made by Tiger Eye had wide consequences on Ghana’s football administration. FIFA fined the head of Ghana’s football association, Kwesi Nyantakyi, almost $500,000 and banned him for life; Nyantakyi was also accused of requesting $11 million to secure government contracts. Lower down the chain, 53 officials were slapped with 10-year bans and eight referees and assistant referees were banned for life.

With the revelations made in Number 12, the journalists “stepped on very powerful toes within the country”, Anas said in an interview with IPI in March 2019. Following the exposé, Tiger Eye journalists became the target of threats. Ghanaian member of parliament Kennedy Agyapong labelled Anas an “extortionist” and even suggested he should be attacked on the street and hanged.

“We [everyone involved in the investigation] were all targets – and we are still targets”, Anas said in the same interview. He added that “people in football are very rich people (and) there are some powerful sources making sure that we don’t find (Ahmed’s) killer”.

Tiger Eye has continued its work after the death of Hussein-Suale, as he would have wished to be done, Anas told IPI this month. But he noted that the murder of Hussein-Suale was a big loss for Tiger Eye as he was senior in the organization. “We do miss him and wish this has not happened. It is difficult to replace unique personalities”, he said.

According to IPI’s Death Watch, Hussein-Suale is one of 13 African journalists killed last year whose death has been linked to their journalism.