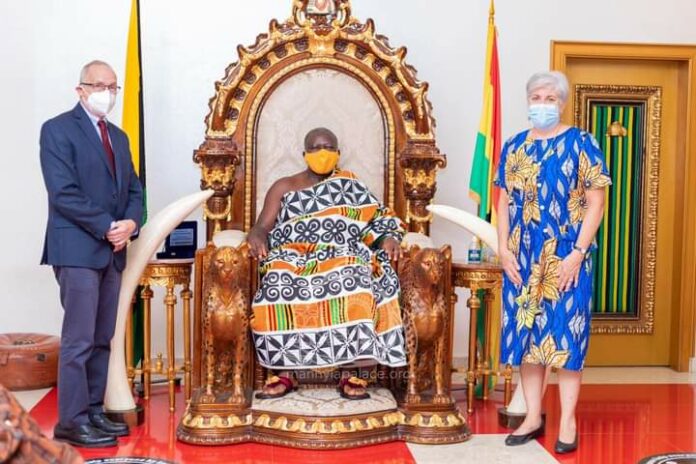 Asantehene Otumfuo Osei Tutu II is entreating Ghanaians to pay attention to their environment and help address the issue of climate change.

Speaking at an event to mark Earth Day, he explained actions by some Ghanaians and persons who refuse to stop illegal mining activities show that the country has not taken the fight against climate change seriously.

He cited major change in rainfall patterns as some effects of the phenomenon.

“We used to have a rainfall pattern that could be predicted and that is how we could even start with farming and all those things. It has changed dramatically and if we are not very careful the whole humans live on the planet might be wiped off before we are able to save the earth.

He also commended the efforts of Lands and Natural Resource Minister, Samuel Abu Jinapor in ensuring that lands and forest reserves are protected against miners by directing the suspension of mining companies engaged in prospecting in forest reserves with or without legal authorisation.

“We come to talk about illegal mining (galamsey) and all those things – the destruction of the water that we drink… and I realise that the new Minister has taken bold steps to find solutions to these things,” he said.

The Oheneba Poku Foundation has taken the initiative to recover the vegetation cover of Lake Bosomtwe.

However, this initiative is being subverted by some unknown persons in nearby communities who engage in the felling of trees.

Reacting to this development, Osei Tutu II stated that the reason for the initiative, which is to create the awareness that climate change is real has not been appreciated by persons living in such communities.

He says the state of lake Bosomtwe is of major concern to him.

“I have been particularly concerned about lake Bosomtwe. The 22 communities who live there, the awareness is for them to appreciate that this is your livelihood and this will sustain you on earth, that is why I initiated the tree planting programme there. Just for people to appreciate that we need to plant trees, we need to preserve our earth and then we also have to be conscious of climate change. It is real.”

In marking the celebration of Earth day, US Ambassador to Ghana, Stephanie Sullivan planted trees along Lake Bosomtwe.

According to Stephanie Sullivan, the Biden administration is keen to ending climate change, hence “has prioritised integrating climate objectives into our larger diplomatic efforts as well as domestic policy.”

The Manhyia Palace has partnered with the US Ambassador to Ghana to grow trees at the water body as part of the Asantehene’s Land Restoration Project.