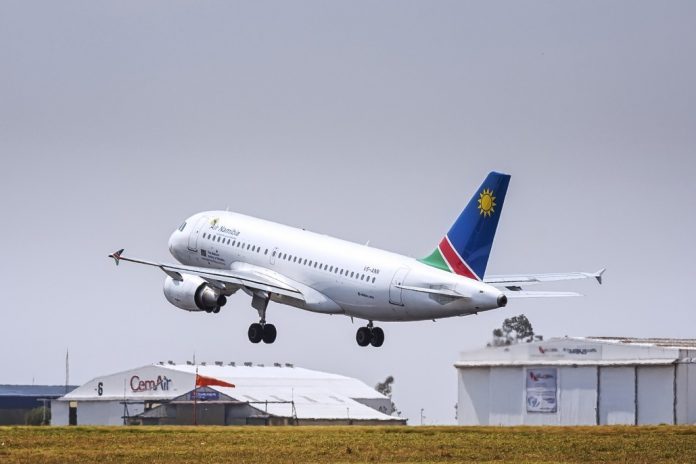 Air Namibia has suspended its Windhoek to Lagos – Accra route as of Friday, May 24, 2019.

The Namibia national airline said it will no longer fly to Ghana or Nigeria over a diplomatic row with Lagos.

“The route started off very well in terms of passenger numbers and revenue generation, and within two months the route was making a positive contribution to the airline’s route network. During February 2019, the Nigerian High Commissioner to Namibia banned the issuing of visas to Namibian passport holders. In addition, there are messages circulating in Nigeria about Namibia being ‘anti-Nigeria’, with travellers being urged to avoid visiting Namibia, as well as avoid using Windhoek as a transit point when travelling to South Africa,” a statement issued by Air Namibia’s Corporate Communications Unit said.

According to Air Namibia’s Acting GM: Commercial Services, Wimpie van Vuuren, the ban on issuing visas to Namibians can be linked to allegations that Nigerians are normally ill-treated by Namibian border control officials at Hosea Kutako International Airport when arriving or transiting through Windhoek. He noted that in this regard Air Namibia consulted various stakeholders to mitigate the diplomatic standoff, but all efforts proved futile.

Due to the diplomatic difficulties, Air Namibia’s load factor performance of the route dropped from average 55 percent attained during June 2018 to January 2019, to between 35 percent and 38 percent during February to April 2019.

The airline’s manager for Corporate Communications, Paul Nakawa, noted that Air Namibia decided to suspend this route for an indefinite period in order to mitigate the related safety, non-compliance and commercial risks.

“Affected passengers will be assisted by accommodating them on flights operated by our partner airlines at Air Namibia’s cost, or they will be refunded if they opt not to fly anymore,” Nakawa concluded.

We’ve not been informed – MTN Ghana reacts to NCA’s new...