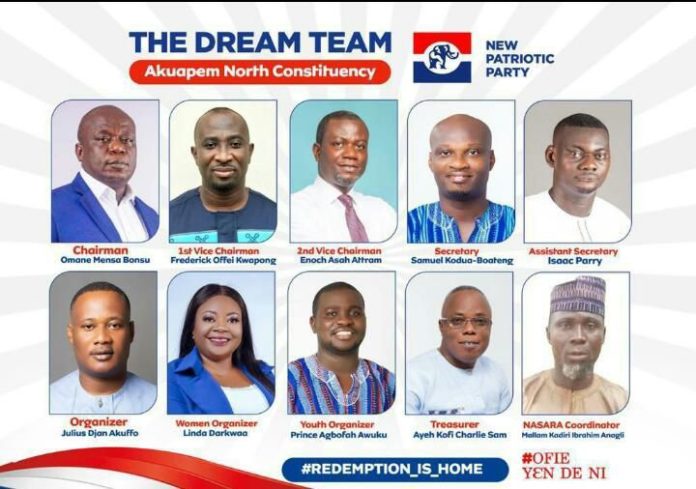 The delayed New Patriotic Party(NPP) Constituency Executive Elections at Akropong in the Eastern Region came off on Wednesday June 15, 2022 after series of legal battles.

The election which was supervised by the Electoral Commission of Ghana and representatives of the party in the region, was held at Amanokrom where several aspirants deemed to be in support of the incumbent Member of Parliament (MP), Maame Dokua Asiamah Adjei, were subjected to a humiliating defeat.

Out of the 10 positions, persons believed to be in the camp of the Member of Parliament (MP) Nana Dokua Asiamah Adjei won only one.

At the end of polls however, Peter Omane Mensah-Bonsu polled 532 votes to emerge as the new Constituency Chairman, Frederick Kwapong Ofei polled 432 in the First Vice Chairmanship race, Enoch Asa Attram won the Second Vice Chairman slot with 480 votes, Samuel K. Boateng polled 373 to become the next Constituency Secretary, Isaac Parry as Vice Secretary with 600 votes and Jacob Amoah with 449 votes as Treasurer.

The others were Julius Djan Akuffo who polled 505 to emerge as the Constituency Organiser, Prince Agbofah Awuku who polled 487 as Youth Organiser, Linda Darkwaa with 460 votes as Women Organiser and Kadri Ibrahim Anagli polled 392 to become Nasara Coordinator.

The Akropong Constituency could not take part in the Regional Delegates Conference after supporters of Member of Parliament (MP) filed multiple suits against the process.

On Tuesday June 15, 2022, a Koforidua High Court (Court Room 3) presided over by His Lordship Justice Senyo Amedahie dismissed one of the suits filed against elections aspirants, describing it as unmeritorious.
Similarly, the Koforidua High Court (room 4) in a case presided over by His Lordship Nana Yaw Gyamfi Frimpong also dismissed an injunction placed on the Akropong North Constituency elections.

The injunction had been filed by two petitioners, Emelia Awuku of Larteh Akaade Number One and Godfred Ampadu of Daakye Akropong.

This paved the way for the elections to be conducted.