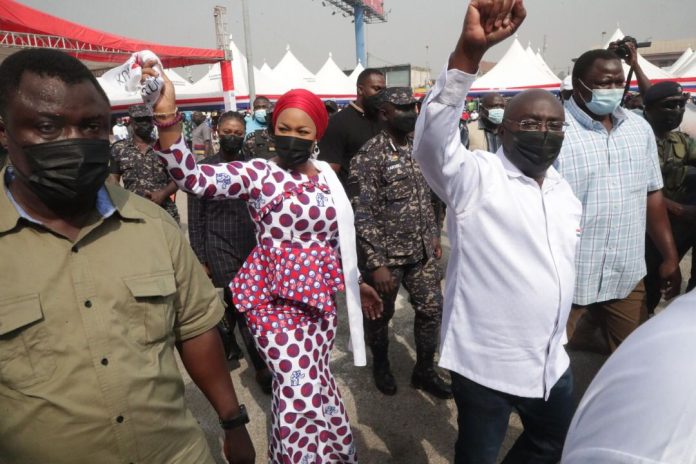 The Vice-President Dr Mahamudu Bawumia on Sunday stole the show at the Heroes’ Park in Kumasi as the governing New Patriotic Party (NPP) holds its annual national delegates’ conference.

The popularity and charisma of Bawumia within the rank and file of the New Patriotic Party came to the fore as his presence was announced – a spectacle political watchers say sends a strong signal about his popularity and the upcoming NPP flagbearership contest.

Bawumia was accompanied by all Members of Parliament of the host region, Ashanti Region. Flanked by his wife Samira, the Ashanti parliamentarians followed him to the dais as he exchanged pleasantries with fellow party faithful.

“We want to send an indirect statement to everyone that Dr Mahamudu Bawumia is the obvious choice to succeed Nana Akufo-Addo in the lead up to the 2024 elections,” one of the Ashanti MPs told Dailymailgh.com on condition of anonymity.

“We know this is not an event to elect a flagbearer but we’re signaling what is good for the party and everyone must know that Bawumia is the only person who can break the eight.”

Also present at the conference is the President Nana Akufo-Addo and other national executives of the NPP.

The Minister of Trade and Industries Alan Kyerematen, who is also interested in becoming the next flagbearer of the NPP was absent at the event.

Over 6000 delegates are attending the conference to consider 38 proposed amendments to the party’s constitution.

Ghana to receive over 17million COVID vaccines by June