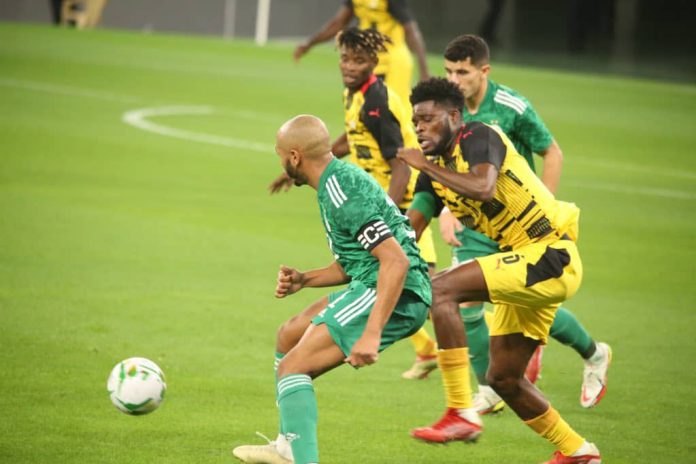 Ghana’s Black Stars were heavily thrashed by the Desert Foxes of Algeria in an international friendly ahead of the 2021 Africa Cup of Nations tournament in Cameroon.

The Green and Whites team begun the game on a blistering pace with some quality football on display and got their reward for the brilliant start to the game after just eight minutes.

Napoli star Adam Ounas went past left-back Gideon Mensah with ease as if he didn’t exist before his weak effort went underneath of goalkeeper Abdul Nurudeen Manaf to make it 1-0.

The Stars after going down upped their game and dominated the game with some good Inter-positional play but failed to cause the problems for the Green and Whites.

After the break, Ghana picked up from where they left off and dominated the game especially in midfield with Thomas Partey and Baba Iddrisu at the heart of affairs for Black Stars.

Issahaku Abdul Fatawu came close to grabbing the equalizer but the Algeria goalkeeper produced a masterclass save to deny the teenager.

Fifteen minutes to the end of the game and the Black Stars growing into the game,Gideon Mensah was out witted with ease again before experienced Jonathan Mensah scored an own with no pressure or whatsoever on him to give the Algerians a 2-0 lead.

Four minutes later, another goalkeeping error which was an unforced one on the part of substitute Ati-Zigi handed Islam Slimani an easy tap in to make it 3-0.

Ghana will play Morocco in five days time in Cameroon in their first afcon game.

Transport fares up 10% in Ghana