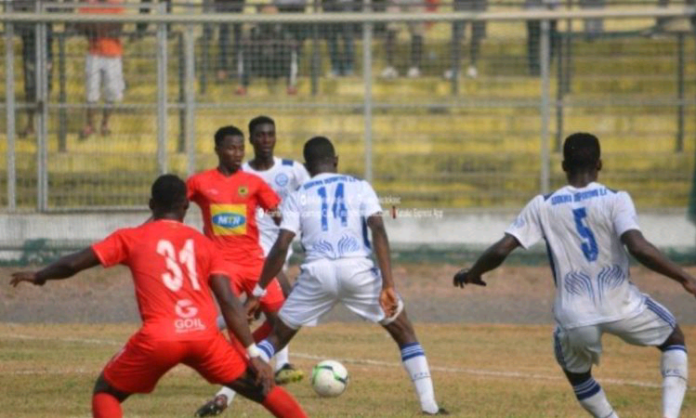 Despite the second tier league side being the better side throughout the match, the Porcupine Warriors emerged a 2-1 winners at the end of game to seal qualification.

Kotoko were the second best team in the match and lacked cohesion and team play against a determined team, Asokwa Deportivo SC.

The Allah is Great Boys could’ve shot themselves into the lead early in the game but Kofi Frimpong was wrongfully flagged offside by the assistant line one.

After Asante Kotoko SC went in front through a spot kick, winger George Darko thought he had equalized only for the assistant referee to raise his flag to call for an offside.

But clearly, the young attacker was nowhere near offside but the lineman again raised his flag to deny the Asokwa-based club a legitimate goal.

Defender Emmanuel Gyan was dispossessed inside the area of the visitors by Imoro Ibrahim and the left-back’s low cross into the box was poked home by forward Evans Adomako to give the Red and Whites a 2-0 lead.

After the break, Asokwa Deportivo pushed forward with purpose and pushed Kotoko to the back resorting to defending their two goals lead.

The away team were the better side from the start of the match and continued playing better in the second half despite going two goals down in the first half.

After a long pass to the wings from the middle of the field, right-back, Steven Asante controlled well and sent a nice pass to Seth Kwadwo who gave an incisive and defense splitting pass to left-back Samuel Owusu who’s perfect cross was connected by the team’s top scorer this Asamoah Boateng Afriyie to reduce the deficit to one with a beautiful finish.

Deportivo came close to equalizing on several occasions but came short in front of goal as Kotoko defended their one goal lead with whole lives.

Darko and substitute Samuel Tetteh forced goalkeeper Razak Abalora into two fine saves with a super strike after pulling one back.

Midfielder for Kotoko Salifu Mudasiru nearly made it 3-1 to Kotoko but his shot went just wide of the upright.

The Asokwa-based Division One League team gave their all to draw level but could not found the decisive goal to send the game into penalty shootouts.

Kotoko held onto their slim lead to win the game 2-1 and book their spot in the quarter finals stage of the competition.