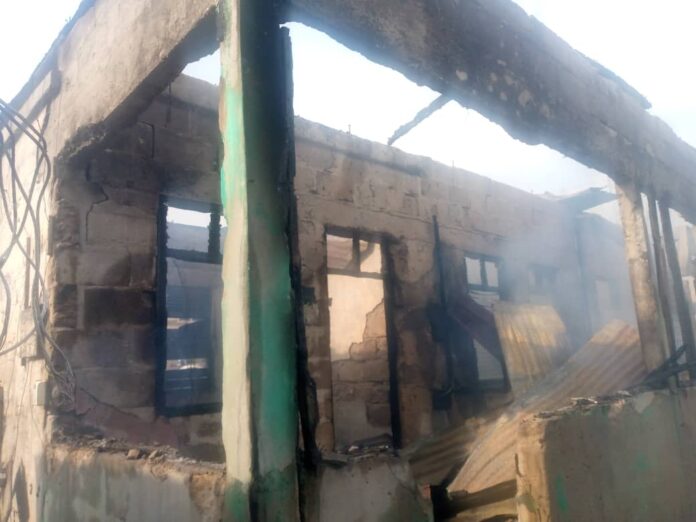 A fire at a compound house at Anloga in the Oforikrom Municipality of the Ashanti Region has destroyed properties and displaced occupants.

At least 10 out of 13 rooms with shops had burned down but there were no reported injuries, firefighters who battled the blaze told dailymailgh.com.

Initial investigations indicate that the fire may have been caused by “electrical issues”. Fire officers at the scene also observed that the situation escalated when residents took matters to their own hands.

“Sometimes when the issue comes people try to fight the fire themselves or they don’t call the right number so this might have caused the fire to spread very fast”, the fire officer noted adding that: “It is an old house and we suspect there are some problems with the cable system.”

For affected tenants and residents they are not convinced with the fire service’s account as they recount how the personnel had a tough time to control the blaze.

“They don’t have the equipment. They can’t work with these water holes”, said angry Assemblyman for Anloga West Electoral Area, Hopeson Keku.

“The government must buy equipment for the fire service. They did what they can. The fire hydrants at Anloga area is not functioning, so how can they work? How can you ran a country this way? he quizzed.

Students urged to consider journalism as their future profession