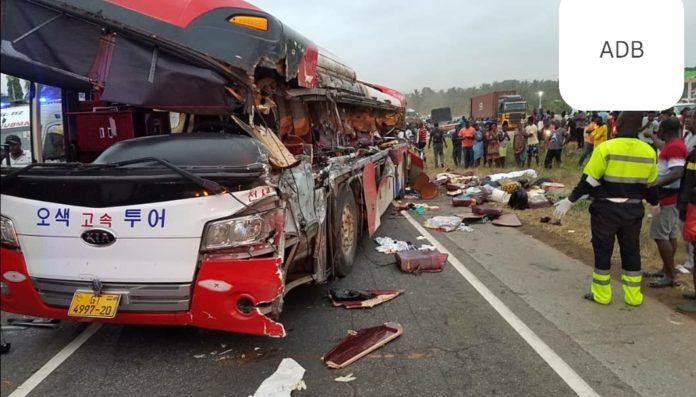 At least 11 people have been killed and several others injured in southern Ghana after a multiple collision between three vehicles.

The accident took place at about 5:30 am local time (05:30 GMT) on a national highway near the town of Kyekyewere in the Eastern Region Tuesday.

“A truck veered off its lane turning left-right then hit one of the buses and hit another Bus so two buses crashed and have resulted in a lot of casualties”, an officer who is part of an emergency team deployed to the scene told Kasapa FM.

“As I speak to you know I am unable to flow because of what I have seen. Very sad scene. So far I counted about ten dead bodies. Body parts such as hands, heads, legs, are littered all over the highway”, he added.

There are fears the death toll could rise as the injured were taken to a number of hospitals in the Ashanti, Eastern, and Greater Accra regions.

No official statement is yet to be been communicated to the media.

Road accidents are a regular occurrence in Ghana, where the poor state of the motorways has been a source of social tension.

On March 9, a fatal accident claimed the lives of at least 30 people on the Kintampo-Tamale road.

The cause of the accident has yet to be ascertained.