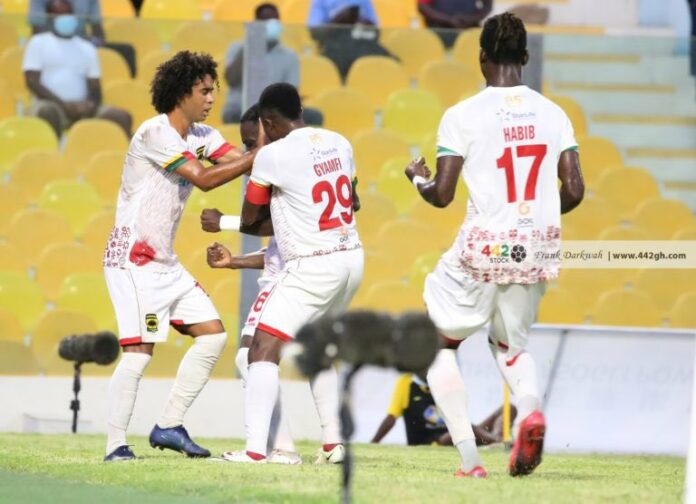 Experienced and versatile winger, Augustine Okrah scored the only goal in the first half to snatch the win for the Porcupine Warriors as they move top of the table.

The Porcupine Warriors dominated the opening minutes with possession and were the better side of the first 15 minutes of the match.

Brazilian star Fabio Gama sent in a delightful and delicate cross into the goal area of the Royals with Okrah providing a telling touch to scored with a flick to beat the goalkeeper and went into the net to put the visitors 1-0 up.

The game was stopped in the 20th minute for the Muslim players in both sides to break their fast.

Legon Cities player Shamsu Alhassan was replaced two minutes after the stoppage for the water break in the 22nd minute and was replaced by Baba Mahama after picking an injury.

Kotoko held onto their 1-0 advantage to secure a vital win over the Royals despite their second half pressure.

The Porcupine Warriors have played a game more than Medeama SC and move top of the league table temporarily with 38 points from 22 games.

Legon Cities FC drop to 16th position with 23 points and are now deep in the relegation fight following their lost to the Red and Whites.

Elections 2020: Patrons of Finishline Gym and Sports Centre in Awoshie...

Ghana – death threats against a prominent journalist – something sinister...