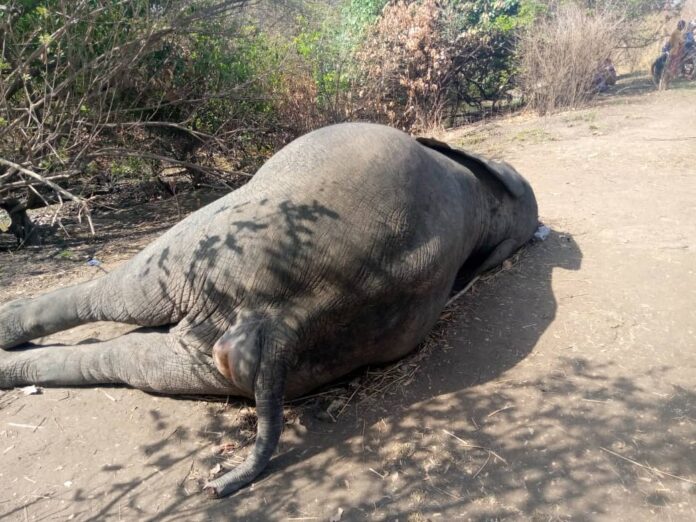 The carcass of a male elephant has been found in the North Eastern part of Ghana in what has been called “a suspected poaching spree” in the West Mamprusi enclave.

The remains were discovered Saturday at Kpaloo, a farming community in between the Wungu and Mishio suburbs in the North East Region.

It was initially spotted wandering about adjoining communities but was later discovered dead with gunshot wounds around the mouth area.

A delegation from the Wungu Traditional Area visited the scene after its attention was drawn to the development.

Talking to dailymailgh.com, leader of the delegation and spokesperson for the Wungu Traditional Area, Alhassan Nasiru said he was shocked by the discovery of the elephant, which may have been killed for its tusks for ivory.

“He [the Paramount Chief ] was looking for those who killed it and because of that he ordered that nobody should touch it…e had to give the forest reserve a notice but unfortunately we didn’t meet them”, Nasiru said in an interview with reporters at the scene.

Ghana hosts one of the biggest number of African savanna elephants in West Africa. They are largely seen in forest reserves and sanctuaries mostly used as tourist sites.

“The Chief is very angry”, Nasiru said as he fears such animal species could face extinction as poachers turn their guns to host communities.

“Yesterday we made him [the chief] calm down [over the development] because we didn’t know the perpetrators… but for now we are searching for them in the quiet”, he further said.

The number of elephants in Africa has decreased significantly in recent years.

In total 352, 271 elephants were counted in 18 countries by census takers.