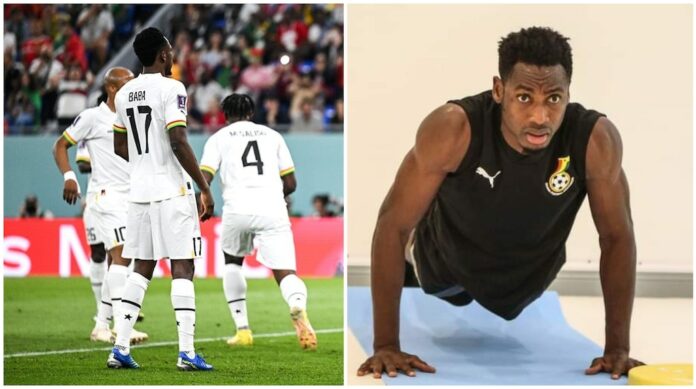 The Ghana gaffer believes the Reading FC player did a very good job defensively for the team in their 3-2 lost on Thursday evening.

Baba Rahman defended so well. Had some good passes upfront.
The problem was his position and yes I admit he was unlucky and made a mistake. But he played so well.”

“What I don’t like about the press is that u depend so much on the negatives but we also have to look at the positives. He defended so well and created some good chances too”.

Ghana’s Black Stars suffered their first defeat of the 2022 FIFA World Cup tournament in Qatar on Thursday evening against the Selacao of Portugal in Group H.

Ghana started the game on a very good note, keeping their defense in shape and giving the Portuguese very little in terms of chances in from of of goal in a half the Europeans dominated.

Ghana were the second best team in the first 45 minutes of the match as the Portuguese dominated the Flamboyant European side with over 70 percent of possession.

Portugal came through on goal when Cristiano Ronaldo was put on goal but Ghana goalie Lawrence Ati-Zigi came out to prevent the Super star from hitting the back of the net.

Ghana did have renewed hope when Osman Bukari headed them back into it in the 89th minute, and they almost snatched an unlikely draw when Inaki Williams cleverly caught out Diogo Costa in the final seconds only to slip at the crucial moment as he tried to nip in ahead of the goalkeeper.

On Monday, the Black Stars return to action with a clash against the Asian powerhouse South Korea at the Education City Stadium in Al Rayyan.

‘And yes we did it! Thank God and every Ghanaian for...