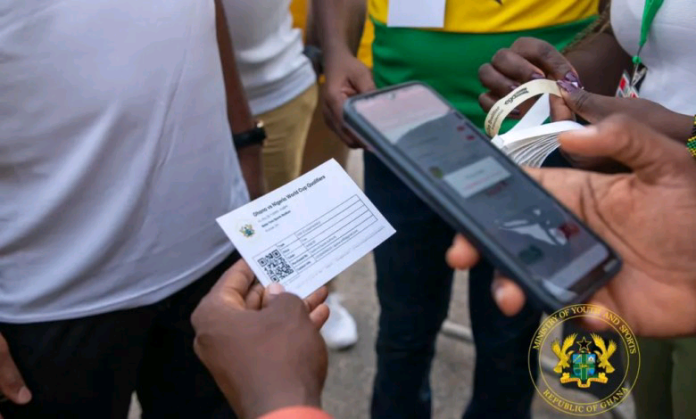 The Vice-President, Dr Mahamudu Bawumia is optimistic that the newly introduced E-ticket system by the Ministry of Youth and Sports for football matches will drastically reduce corruption and increase revenue in the sector.

The E-ticketing platform was rolled out for the first time, in last month’s World Cup qualifier between Ghana and Nigeria at the Baba Yara Stadium in Kumasi.

Speaking to Ghanaians on the state of the economy at the national TESCON conference on Thursday (7 April) in Kasoa, Bawumia said the E-ticketing platform will now be rolled out across all major stadia in Ghana.

“To address the inefficiency and corruption within the ticketing regime for football, the Ministry for Youth and Sports, in collaboration with the National Sports Authority and the GFA piloted an e-ticketing system for the recent World Cup qualifying match between Ghana and Nigeria at the Kumasi sports stadium. People who wanted to buy tickets could do so on the mobile phone.

“No need to waste time queuing for tickets or buying them from the black market. It was a successful pilot and yielded the highest ever 98 revenue (GHC 1,423,400) for a football match in the history of Ghana,” Bawumia said.

“This system is now going to be rolled out to all major stadia in Ghana. Digitization is going to deal a severe blow to corruption in the ticketing for football games and result in higher revenues for our football clubs,” he said.

E-ticket has come to stay
The Minister for Youth and Sports , Mustapha Ussif, has officially launched the e-ticket platform, and has indicated the digital indication has come to stay.

The government’s new strategy aims to make it easier and convenient for football fans to purchase match tickets online and have quick access to numerous venues around the country.

During the unveiling of the e-ticket platform at the Baba Yara Sports Stadium last week, ahead of Ghana’s World Cup play-off first leg against Nigeria, the Sports Minister stated, “It is very exciting. Now our spectators can buy tickets online and access our sporting facilities without any challenges. You can see it took me 30 seconds to be verified and access the stadium.”

“This digital innovation has come to stay,” he added.

Mustapha Ussif went on to say that preparations are underway to guarantee that the technology is used for all Premier League games played at the various stadiums.

“Onwards, anybody accessing the stadium whether it is a national team game or the Premier League, once it is a government facility will be accessing it through the e-ticket platform which is a policy of the government.”

Within 48 hours of its opening, the site sold over 20,000 tickets, setting a new record for e-ticketing. The tickets were eventually sold out about 8 hours before the game.

According to rumours, the National Sports Authority generated GC 1.4 million on the e-ticketing platform for the sold out Ghana vs. Nigeria first leg World Cup playoff.

The e-ticket portal will have all tickets for national team games from now onwards.