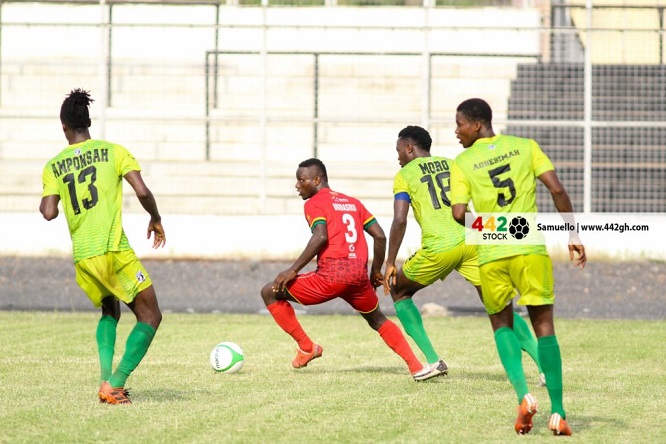 The Hunters beat the Porcupine Warriors 2-1 at the Nana Gyeabour Park in Bechem on Sunday afternoon to move up to safety spot in the ongoing 2020-21 Ghana Premier League with a game to spare.

Budding striker, Steven Owusu toe poked the first goal of the match to put the hosts in an early lead after receiving a pass inside the goal area after just four minutes of action at Nana Fosu Gyeabour Park.

Bechem were the better side in the opening minutes and deserved their lead against a lackluster Porcupine Warriors side on the afternoon.

Two minutes after the hour mark, the home team’s goalkeeper committed a blunder and was severely punished by striker Solomon Sarfo Taylor to draw Kotoko level on the 32nd minute mark.

Four minutes to the end of the first 45 minutes of the match, Bechem United were awarded a spot kick which looked a bit questionable but Owusu stepped up to send goalkeeper Razak Abalora the wrong way to make it 2-1 to the home team before the interval.

Kotoko, after the break tried to impose themselves on the hosts but they couldn’t find their way past the resolute defense.

The home team held their ground to repel any danger by the Red and Whites to emerge 2-1 victors at the end of the match to escape relegation.

With a game to spare, Bechem United are safe and will be playing in the 2021-22 Ghana Premier League season as Kotoko miss out on the trophy to their bitterest rivals Accra Hearts of Oak SC.

EPISODE 12: When the Sun Pointed South