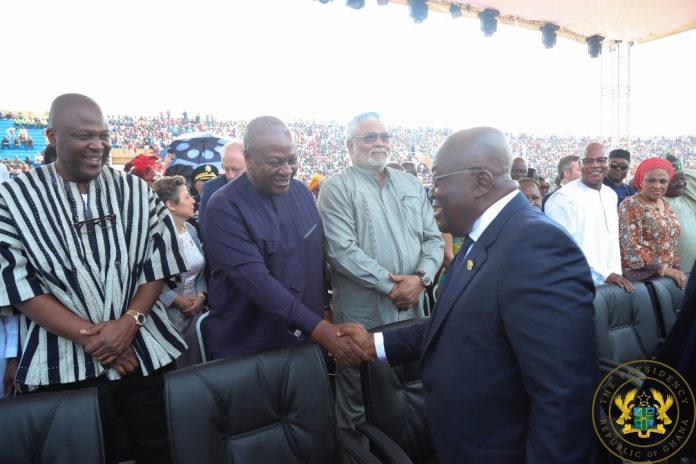 I will begin with excerpts from a WhatsApp chat I had with an NPP voting US-based very good friend of mine last weekend.

Friend: Do you know what happened? Can you find out from John? Study the last Malaysian election and how the opposition won by co-opting Mahathir…

ARHA: From my enquiries it was simply a case of pettiness, bad manners and hate…But I will get details.

Friend: Ok. People can’t believe it is true. Some claim video may have been doctored.

ARHA: Oh yes, that is another possibility. After all, something similar happened during Kwabena Agyarko’s funeral which turned out to have been doctored. I will find out more.

ARHA: (Some hours later). Good evening my brother. I spoke to a very reliable witness about an hour ago. He confirmed and said it was the third time!

The above WhatsApp chat represents the incredulity of the many people who saw the clip showing Nana Addo Danquah Akufo-Addo’s perfunctory handshake with John Dramani Mahama at the Peace and Security Summit which took place at the Kofi Annan Peace Keeping Centre in Accra last week. In fact, it was hardly a handshake at all.

The clip was not doctored and represented truthfully and accurately what took place. The hostile and belligerent body language against the former president was clear for all to see. When the clip went viral on the social media, it became the talk of town and still is on many social media platforms – all in disbelief and indignation.

But it is not disbelief or indignation alone that have motivated me to put fingers to keyboard. Like I wrote in an article in the last week or two of Election 2016, there comes a time when a person has to stick his or her neck out to express an opinion on conscience. For those who felt I had no business doing that then, well, I am afraid I must put them through some inconvenient truths again.

By his very public show of contempt and disrespect towards the man who left office for him to succeed, Nana Addo Danquah Akufo-Addo had completely made nonsense of the overriding reason of the Summit: Peace and Security. Hostility and belligerence – even at that microcosmic level, lie at the very heart of breakdowns in peace and security, for they destroy trust and create tension.

That he could not use that platform to be civil to his predecessor, even as it is clear he does not like him (and which no one can force him to), for the sake of the theme of the conference and in full view of their peers, means to me that he cannot be trusted to be an honest arbiter in times of national or international conflict. In fact, between the two, John Mahama has more ground to harbour antipathy toward his successor considering the often unfair vile attacks he suffered from him in particular and other followers…

Was it anger, arrogance, pettiness or vindictiveness that could have led an incumbent to behave so shabbily towards his immediate predecessor? This and other similar actions have sent me ruminating over “Electoral Mandate” and its exercise.

When you win an election, it is in fulfilment of a principle: citizens ceding their own powers, for the sake of national cohesion and coordination to enable the “victorious” to run affairs in a way and manner that will lead to wellbeing, progress, happiness, and also give all citizens a sense of belonging. It is agreed by mutual consent of winners and losers in elections to go along with the results if certified as free, fair and peaceful by the competent authority, so that the state does not fall apart. It does not impart any authority on whoever are called upon by that mandate to go arrogating to themselves powers of superiority and omnipotence and tendencies of self-aggrandizement…Mandate means doing things in our name not in your way! You may not like your predecessor, that’s your right, then don’t invite him to have a drink or accompany you to a football match, but you cannot treat him with disrespect in our name! Our name and your personal angsts, two diametrically opposite entities…

In recognition of the mandate, society puts at the disposal of the winners all that is necessary to make  incumbency effective and beneficial to the polity: a Presidential Residence: A Presidential Jet. A Presidential Motorcade and even, the powers to grant or deny pardons. All these, so that society can look up to you to provide that kind of personal behaviour, way above the ordinary citizen’s. It does not expect you to behave like a churlish child on the school compound – the compound, a metaphor for the kind of public space like the Kofi Annan Peace Keeping Centre where everyone is expected to be at their best behaviour. Poor Kofi, he must be turning over in his grave…

Electoral mandate should not be taken as if you have the right to behave in any way you like and bring your office and indeed your country into disrepute. To do that calls your own fitness for that office into question (Re: Kofi Coomson). In fact the mandate imposes on you many obligations, though some may go against the grain of your normal character. There is something I believe, called “Noblesse Oblige”. The expanded interpretation is for people at the top of power, wealth, privilege and influence to rise above it and behave themselves with courtesy and responsibility.

As a Ghanaian approaching my 67th birthday next week, September 16, I have to accept that I now belong to the class which falls under the strictures of noblesse oblige and can in full conscience say no, no, no to certain things! A line was crossed that diminished the stature of my country by that non-handshake..

Culturally, handshakes with eye contact mean a lot to us and so, half-heartedness or rudeness in the process, towards a colleague, peer or even subordinate is taboo and could be taken as an invitation to conflict. Can you imagine one chief behaving this way to another in public? People in leadership are expected to set a tone and lead the way for others to emulate to create a softer and gentler polity. So if I may ask: Where are the voices of 2015/16 indignation? The CSOs? The Peace Council. Some traditional rulers. The Council of State. The Media, etc.?

I conclude this commentary by surrendering my concluding words to my US-based friend’s parting words to our WhatsApp chat: “My best wishes to JM. Tell him it is always good to be courteous. I really appreciated how he treated me when we met for the celebration of the transition bill.”