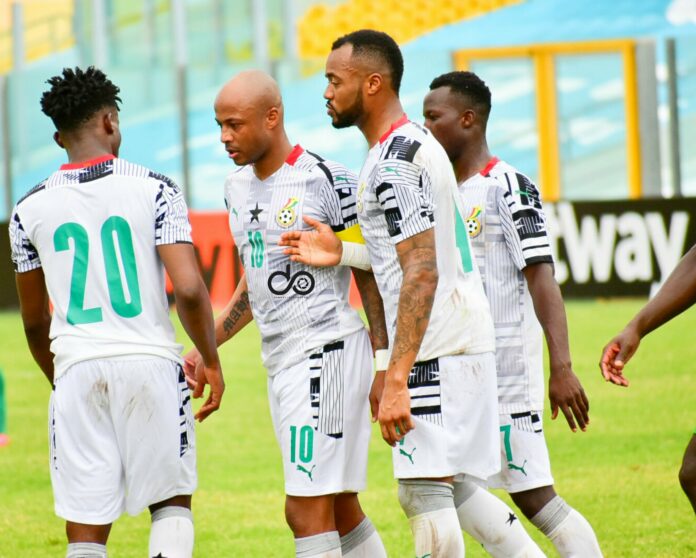 Black Stars beat Sao Tome and Principe in their final group game in Group C of the 2021 Africa Cup of Nations qualifiers on Sunday.

The four-time African Champions defeated the whipping boys in the group to secure their fourth win in six games in the AFCON qualifiers.

On the 29th of the match, Crystal Palace striker Jordan Ayew was brought down illegally in the box and the striker picked himself up to score the resulting to make it 2-0 to the hosts at the interval.

Great Olympics captain Gladson Awako was brought on at half time to replace Osman Bukari at the beginning of the second half and the 30-year-old was a delight to watch throughout the 45 minutes.

After the break, PAOK Thessaloniki defender, Abdul Baba Rahman tapped in the third goal with his right foot inside the box into the top right corner of the goal post to make it 3-0 .

Seven minutes to full time, Kumasi Asante Kotoko SC shot stopper Razak Abalora gifted the visitors a goal when his pass found the opponent just outside the goal area to reduce the deficit to two.

Soon after Sao Tome got one back, debutant Kwasi Okyere Wriedt was sent through on goal but his effort went wide off the right hand side post.

Ghana were 3-1 victors at the end of the game.