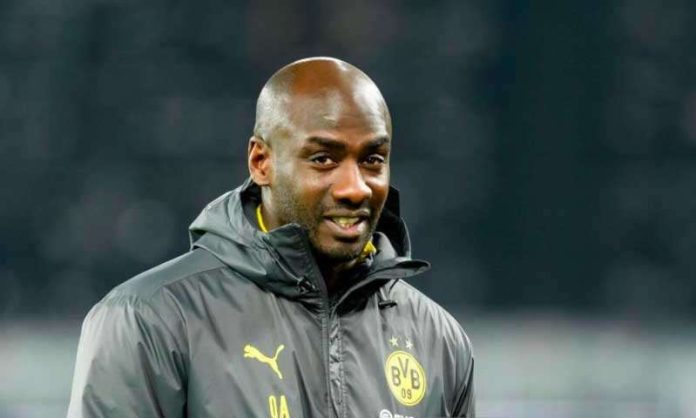 The fformer Borussia Dortmund player Otto Addo who was the assistant coach Milovan Rajevac during the later part of the Fifa World Cup Qatar 2022 African qualifiers.

The Ghana Football Association on Wednesday evening confirmed the appointment of Otto Addo as the man to lead Ghana into next month’s FIFA World Cup Qualifiers playoffs against Nigeria.

The Ghanaian is a devepment coach at Germany Bundesliga team Borussia Dortmund as Ghana’s new gaffer after the sacking of Serbian coach Milovan Rajevac.

Otto Addo has been appointed to take charge of the four-time AFCON champions in their crucial Qatar 2022 FIFA World Cup Qualifiers against the Super Eagles of Nigeria in March.

The gaffer was the preferred choice of the Ghana Football Association for the vacant Black Stars coaching role and has now been given government concern to appoint the former Ghana star.

He will take charge of the Black Stars when the play next month in the final qualifiers of the Qatar 2022 FIFA World Cup against brothers, the Super Eagles of Nigeria.