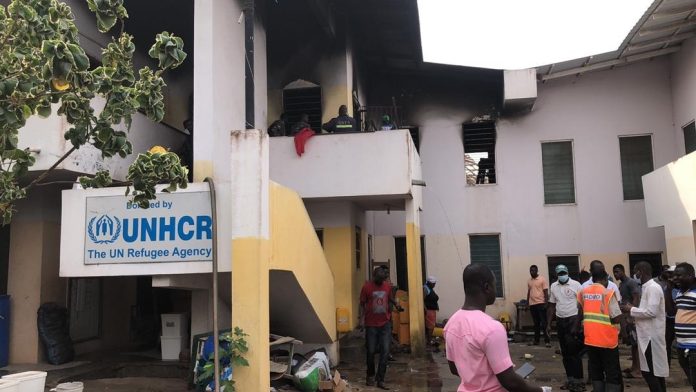 An investigation has been launched after a Ghanaian couple and their five children died when their apartment was destroyed by fire, an official statement confirmed on Saturday.

The victims including a four-month-old baby, were declared dead when fire swept through their home near Buduburam, a refugee settlement located 44 kilometers (27 mi) west of Accra, the nation’s capital.

An incident report from the Ghana National Fire Service said an engine was dispatched to the scene when a distress call was placed at about 06:34 GMT, more than 30 minutes after the start of the fire.

The fire crew which got to the scene in about six minutes later met the inferno in advanced stage with the affected trapped at the top floor of the building known also as Teachers’ Quarters.

“Eye witnesses who got to the affected teachers flat after hearing the shouts for help from the now perished fire victims say, they could do little to save the trapped family because of how intense the fire was and the burglar proof in the affected apartment. They recounted that these impeded the victims from safe evacuation”, the report said.

The fire was declared under control at about 07:00 GMT and was finally extinguished 12 minutes later.

Preliminary investigations reveal, the fire started in the hall and spread to the adjoining bedroom, kitchen and bathroom of the deceased apartment. The fire eventually confined to the deceased family apartment, according to the GNFS statement.

The fire was highly concentrated in the hall owing to the presence of much fuel load. The intensity of the fire coupled with rapid fire spread amidst burglar proofing in most section of the living room made it difficult for the family to escape to safety through the hall since the hall was the only access to the final exit at the time of fire, it is reported.

“The deceased family’s apartment made up of a bedroom, kitchen and a hall and their contents including furniture, bed, beddings, clothes, electronic appliances, etc worth several thousands of cedis were destroyed. The family of seven (7) whose details are not readily known perished in this dawn’s fire. Their badly charred bodies were handed over to the Police for preservation and autopsy. The deceased family included the father, mother, and five children including about three month old baby”, the statement disclosed.

“The affected building has now been cordoned off and declared a crime scene under Police Protection until further investigation into the circumstances that led to the fire are established”, the statement further added.

Nkwanta: Boy who was banished returns after police intervention