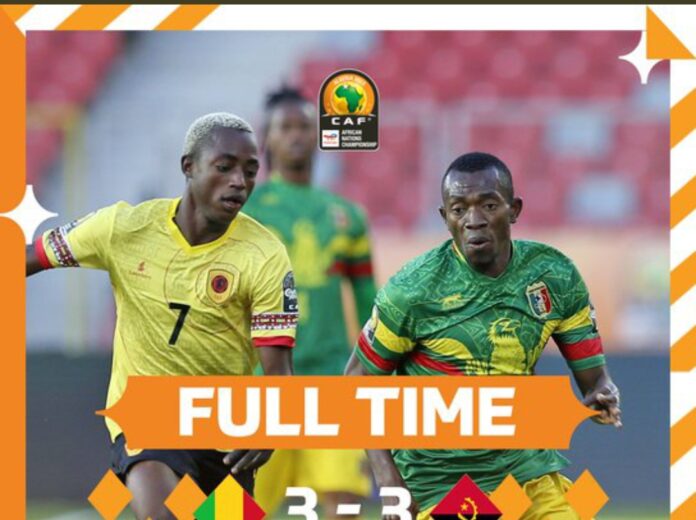 The Eagles of Mali came from behind to pick up a precious point against the Palancas Negras of Angola on Monday afternoon in Algeria.

The two teams played the best game so far of the ongoing 2022 CAF Africa Nations Championship (CHAN) tournament in Algeria in Group D.

Angola came out from their blocks quickly after the the kickoff and showed real intent of winning the the game by stamping their authority on the game.

The pressure by the Palancas Negras finally paid off when Laurindo Dilson Maria Aurélio found the back of the net with a sweet strike to make it 1-0 to the South Africans.

Hamidu Sinayoko on the 23rd minutes of the match and 11 minutes after going a goal down scored the equalizer for the Malian to restore parity.

Three minutes later, Laurindo Dilson Maria Aurélio scored again to restore the lead for the Angolans who ended the first half with their noses in front.

Deivi Miguel Vieira scored the third goal to put the Angolan team in the driving seat with a close range strike after 72 minutes of the match.

Yoro Diaby scored one for Mali 12 minutes away from the full time whistle before Oysmane Coulibaly scored the leveler to make it 3-3 at the end of the end-to-end and highly entertaining game.