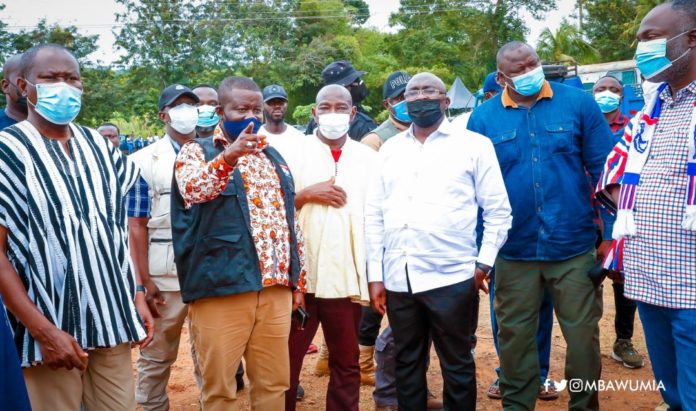 Government is to foot the medical bills of the victims of the Akim Batabi building collapse disaster, Vice President Dr. Mahamudu Bawumia has announced.

The families of the disaster will also receive some financial assistance to help them go through these trying times.

The Vice President, who handed over an initial Ghs 200,000 to the families on Sunday, 25th October, 2020 at Akim Batabi, said Government stood ready to do more if the need arises.

The six-storey church building of the Church of Prosperity collapsed onto about 35 worshipers on Tuesday night, leading to the death of at least 22 persons, while others rescued from the rubble are receiving treatment.

Accompanied by the Director General of the National Disaster Management Organisation (NADMO), Eric Nana Agyemang-Prempeh, Eastern Region Minister Eric Kwakye Darfuor and other officials, Vice President Bawumia visited the site of the disaster and consoled the families of those who lost their lives.

“On behalf of President Akufo-Addo and the entire government, I wish to express our deepest condolences to our brothers and sisters who have been affected by this disaster. Only God knows why this has happened, and we can only ask God to help us in this difficult time” Dr Bawumia said.

“Government will foot the medical bills of the victims. We will also provide some financial assistance to the families to help them cope with this challenge.”

Thanking the rescuers, especially the townsfolk, local contractors, members of the 48 Engineers Regiment, and the Achiase Jungle Warfare school, Vice President Bawumia singled out a local, popularly known as ‘Cote d’ Ivoire’ who reportedly burrowed into the rubble and single-handedly rescued 17 persons.

“Ghana is grateful to you” Vice President Bawumia stated.

The chiefs and people of Batabi thanked Government for the kind and speedy support.

The founder of the Church of Prosperity, Prophet Akoa Isaac, has since been arrested and assisting with Police with investigations.