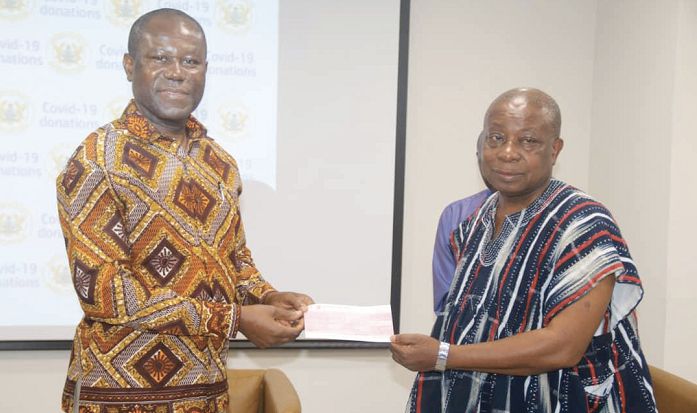 The Chief Executive Officer (CEO) of the Ghana Cocoa Board (COCOBOD), Mr Joseph Boahen Aidoo, and his three deputies have donated 50 per cent of their salaries for the next three months to support the fight against the Coronavirus disease (COVID-19) pandemic.

Mr Aidoo, who announced this on Tuesday, March 31, said the deductions would be paid into the COVID-19 fund that President Nana Adoo Dankwa Akufo-Addo had launched.

In addition to the salaries, the CEO, on behalf of COCOBOD, made a cash donation of GH¢200,000 and other items to the Ministry of Health in Accra to further support the fight against the spread of the virus.

The items included 5,000 containers of alcohol-based sanitisers that were produced by the board, 10,000 pieces of liquid handwashing soap and 60,000 bottles of natural unsweetened cocoa powder.

Mr Aidoo said the donations were for frontline COVID-19 workers and patients under quarantine.

At a short ceremony to present the items and the cheque, Mr Aidoo said the presentation was in support of the government’s proactive steps to stop the spread of the disease before it overwhelmed the national health systems.

He said the unsweetened cocoa powder was intended to help strengthen the immune system of the frontline workers.

“Day in and day out, we have a lot of free radicals being developed in our bodies, and for us to get strong, we need antioxidants, which are in certain foods, including cocoa”.

“Cocoa has the highest amount of antioxidants.

“So, we found it imperative that the frontline staff, because they are all at risk, need to enhance their immune systems,” he said.

“Therefore, we are presenting this to the ministry and to the frontline staff and to all those confirmed to have gotten COVID-19,” he said.

The Minister of Health, Mr Kwaku Agyemang-Manu, who received the items and money on behalf of the ministry, thanked COCOBOD for demonstrating goodwill towards supporting the efforts of the government to help protect citizens.

“You have my assurance that all the items that you have given us will go to the places where they should go,” the minister said.

“The funds will be transmitted to the COVID-19 Fund which the President has set up to help in the present response efforts and the aftermath of the pandemic,” Mr Agyemang-Manu added.

The minister also used the opportunity to plead with the general public to observe the retrictions in movement in the affected cities to prevent new infections.

“There is no point leaving Accra or Kumasi to go to your village because in doing so, you are helping spread the disease.

“What the scientists tell us is that, if we are able to break the chain of spread, we would have solved our problem,” he said.

He added that, “If you know somebody who is planning to go to his hometown, ask that person to stay.”

He said it was good news that the country was not recording many deaths from the disease.

He explained that the five deaths recorded “were all caused by co-morbidities; underlying sicknesses that these people had even before they tested positive for COVID-19.”

“Also, 31 people have been treated and discharged. That means that there is hope for us,” he said.

Consequently, Mr Agyemang-Manu advised the public to continue to educate themselves about the disease and also stop moving.