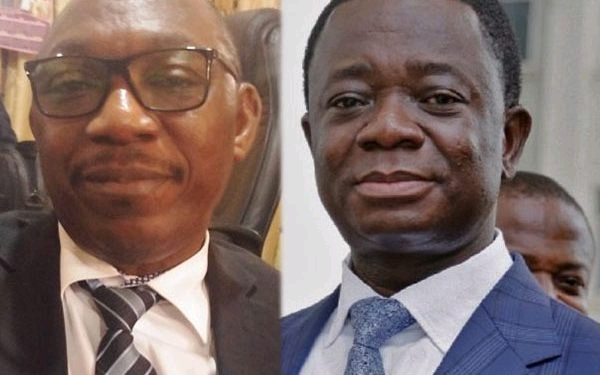 The Entity Tender Committee of Ghana Cocoa Board (COCOBOD) used the right channels and due processes in approving the procurement of Lithovit Liquid Fertiliser for the state company, the first defence witness in the GHS217-million financial loss case involving Dr Stephen Opuni, an ex-CEO of Cocobod and businessman Seidu Agongo, has told the Accra High Court (Criminal Division) presided over by Justice Clemence Honyenuga, a Supreme Court Justice sitting as an additional High Court judge.
Under cross-examination by Mr Nutifafa Nutsukpui, Dr Opuni’s witness told the court on Monday, 11 April 2022 not only did the ETC give the procurement of Lithovit a clean bill of health but also the supplier had nothing to do with the ETC’s meetings on that matter.

Additionally, he said he treats the claim by one of the witnesses of the State that the fertiliser was “worthless” with the “contempt it deserves”.

Dr Opuni, Mr Agongo and his Agricult Company Limited (First, Second and Third Accused Persons) have been charged with 27 counts in connection with the supply of alleged substandard fertiliser which, according to the State, caused the nation to lose GHS217 million.

Read excerpts of the cross-examination below:

Q. Please confirm to the court that between 2014 and 2016 when you served on the ETC, as far as you can recall, all fertilisers that were purchased by Cocobod and paid for went through the ETC approval process?

Q. Now, sir, between 2014 and 2016, while you served on the ETC, did Lithovit Liquid Fertiliser also receive the concurrent approval of the ETC as far as you can recall?

Q. Now, please confirm to the court whether any supplier ever determined the agenda for the meetings for the ETC while you served on it between 2014 and 2016.

A. No, my Lord, it never happened.

Q. And when Cocobod is procuring for the season, it procures the agrochemicals that are determined by the scientist as required for application for that particular season. That is correct?

A. Yes, my Lord but I want to add that more specifically by the CODAPEC HI-TECH Unit.

Q. You told this court that the CODAPEC HI-TECH Unit was made up of scientists from CRIG. Is that correct?

Q. And it is these scientists that determined the agrochemicals, including fertilisers and their prices which Cocobod must procure for any particular season.

Q. Now, these scientists are the only persons who will determine the suitability of any agrochemicals including fertilisers for use on cocoa.

A. Yes, my Lord, in conjunction with CRIG. Q. Now, this determination of suitability of agrochemicals for use on cocoa is not made by the Board or Management of Cocobod; that is correct?

Q. While you served on the Board between 2014 and 2015, the Board had no reason to doubt the integrity of these scientists?

A. No, my Lord, nothing of that to my knowledge. Q. And, in fact, Lithovit Liquid Fertiliser got recommended by the scientists for procurement, as far as you are aware. That is correct?

Q. Now, sir, it was suggested in this court by PW7 on the 1st of March 2021 that when both the ETC, on which you served as well as the Board approved the procurement of Lithovit Liquid Fertiliser, they did not know what they were doing. What do you say to that?

A. My Lord, this assertion is not correct and it is an affront to the members of the ETC. If I may go further, CRIG has inspectors who follow up to the field and report on the performance of the various agrochemicals being applied on the field. There was not any single instance where an adverse report was made on Lithovit Liquid Fertiliser which would have informed the ETC’s approval of further purchases of Lithovit Liquid Fertiliser over the years. Q. Now, sir, from 2014 to 2016, would you remember whether the Lithovit Liquid Fertiliser was bought by Cocobod and applied by the farmers in all of the cocoa seasons of those years?

Q. Sir, what will be your reaction if it was suggested that in buying and paying for Lithovit Liquid Fertiliser, Cocobod paid for a worthless product for which it received no value.

A. My Lord, I will treat it with the contempt that it deserves.