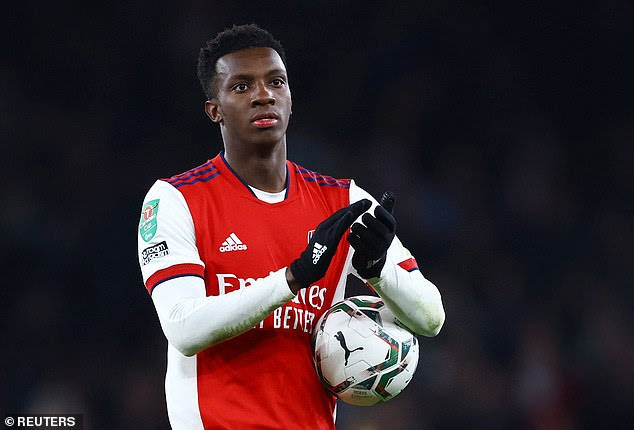 Arsenal striker Eddie Nketiah has considered switching national allegiance to Ghana after the Black Stars qualified for the upcoming World Cup in Qatar later this year.

Nketiah, 22, is keen to be part of the tournament in the Gulf State in seven months time, according to our trusted sources from the camp of the player.

The Ghana Football Association have contacted his family in recent weeks over a possibility to switch allegiance, as they look to have him on board for the World Cup.

The youngster was born to Ghanaian parents in the United Kingdom, but he has represented England at all youth levels. He has 17 appearances for England’s Under U21 side, and netted 16 goals in the process.

Whilst not yet featuring for the Three Lions’ senior side, his chances of reaching the tournament later this year are perhaps brighter than ever.

Ghana are apparently very optimistic of Nketiah representing them after successfully convincing him and his parent and after the West African giants secured their fourth appearance at the global competition remain confident of getting the youngster for the tournament in November.

A switch might be attractive as he would be much more likely to play regularly for Ghana than for England, where there are plenty of options in his position, including captain Harry Kane.

Should he head to the World Cup, it will likely boost his chances at club level. Nketiah has made just 12 appearances for Arsenal this season in the Premier League, all as a substitute.

The player continues to be linked with a move away from the Emirates, with Crystal Palace one of the teams keen to secure his signature when his contract expires at the end of the season and could add more value to his transfer market should he play at the World Cup.

Ghana are in same group as giants Portugal, Uruguay and Korea in Group H for Qatar 2022 FIFA World Cup tournament.

SDGs: Ghana will be a shining example – Akufo-Addo