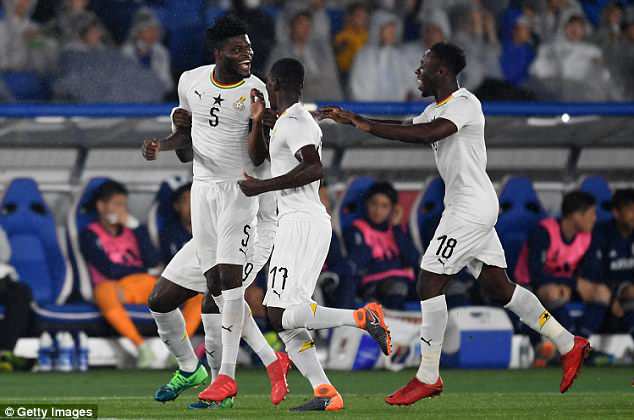 The die is cast.

Ghana has a new captain (the former vice-captain) and a new general captain (the former captain), and the refreshed order should kick in fully before the Africa Cup of Nations in Egypt kicks off next month. Between Andre Ayew (captain) and Asamoah Gyan (general captain), however, is an armband stretched taut, but it is right through the gaping vacuum created within that another ‘influencer’ rises.

See, Ayew and Gyan may be the most popular figures in the Black Stars’ set-up — with 28 years of international experience between them, they have certainly earned all the respect they get — but, given their ugly little rivalry, the leadership of neither man receives absolute recognition. Everyone in and out of the Stars’ camp knows who the real boss — the uncrowned king — is: Thomas Partey.

The Atletico Madrid utility man is everything Gyan and Ayew ain’t: young, top-of-his-game, highly sought-after, and still on the rise. That is far more than could be said for the aforementioned senior pair, yet Partey has stayed far from the agitation over leadership that plagues the Stars.

Perhaps it is because Partey — reportedly targeted by [among other suitors] Manchester United as a potential replacement for Paul Pogba, should the wantaway Frenchman depart this summer — has only been three years a Black Star. Or maybe it is because unassuming Partey loves to go about his work with a minimum of fuss.

Either way, he clearly does not need any version of the captaincy to make his mark. He is the true leader of this team, the guy head coach Kwesi Appiah would be better off weaving his Afcon-winning plans around and the one whom Ghanaian fans ought to look up to more than any other.

Thriving in such a starring role should not be hard for Partey; he has been at the fore for Ghana since late 2017 when Ayew and Gyan were ‘exiled’ from the national team. If he can assert himself in his own quiet way as the figure who is the real head, Partey should relegate those two to being the figureheads they really are.

“Partey is doing very well and with his abilities and with what he can do on the field, he can help Ghana go far,” Stephen Appiah, a former Ghana skipper and presently a member of the team’s technical bench, told Goal.com.

The 25-year-old himself agrees quality — and not just his — is key to success at the Afcon finals, but opines that much more is required.

“Unity and working for each other will be vital because we have got the quality of players already so we all have to be on the same page,” Partey tells the BBC.

If he could, somehow, overcome the atmosphere of negativity recent events suffocate the Stars with, Partey’s potential to drag the rest of the squad with him to the trophy would be easily evident — even if he’s not the one who gets to lift it in the end.