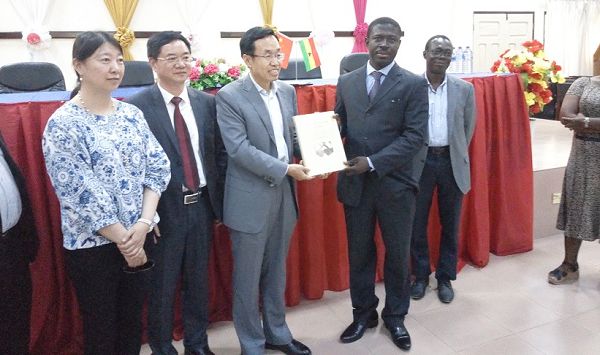 The Chinese Ambassador to Ghana, Mr Shi Ting Wang says his government would aid the Ghana government to urgently repatriate any Chinese found to have been engaged in illegal mining popularly called “galamsey”.

Mr Shi said the Chinese Embassy and its government were sometimes surprised as to how some Chinese arrested for illegal mining were released back into the country without any communication with the embassy for their repatriation.

According to him, if those arrested for engaging in illegal mining were released without any communication with the Embassy, it would be difficult for the embassy and for that matter the Chinese government to support efforts of the Ghana government at fighting the galamsey menace.

He said it was important that Ghanaians must first stop aiding foreigners in the galamsey business if efforts at fighting the menace is to be successful.

Mr Shi was responding to questions on some Chinese nationals involvement in the illegal mining after speaking at a lecture organized by the Confucius Institute at the University of Cape Coast on Tuesday.

He said while the China government acknowledged that there were some Chinese nationals engaged in illegal mining activities, they were undoubtedly being assisted by Ghanaians to perpetuate the crime.

He said Ghanaians must acknowledge their role in the menace if the fight was to be successful.

“We don’t know where your gold is. We don’t issue visas too for the Chinese people coming to Ghana. Ghanaians issue the visas. Ghanaians aid the Chinese to where they can find your gold. Why are Chinese not doing illegal mining in South Africa where there is also a lot of gold…because they cannot do that there and the locals don’t support such illegalities,” he stated.

He emphasized that the Chinese government would not tolerate any of its nationals engaged in illegalities in another country.

He said Ghanaians role in perpetuating the illegal mining menace had made the fight even more difficult to win.

He further called for tightening of the nation’s border security to help reduce Chinese nationals coming into the country illegally.

Mr Shi said China-Ghana relation has thrived several decades, adding that would continue to strengthen the bond and create opportunities for prosperity for both countries.

He called on the students to study hard and develop interest in the study of the Chinese language, saying it was the language of the future.

The Provost for the College of Heath and Allied Science, Prof Johnson Boampong who chaired the function called on the students to take interest in the study of Chinese language to prepare themselves for the future.

ROLLING STONE: How Long Would Fabin Be At Aduana?