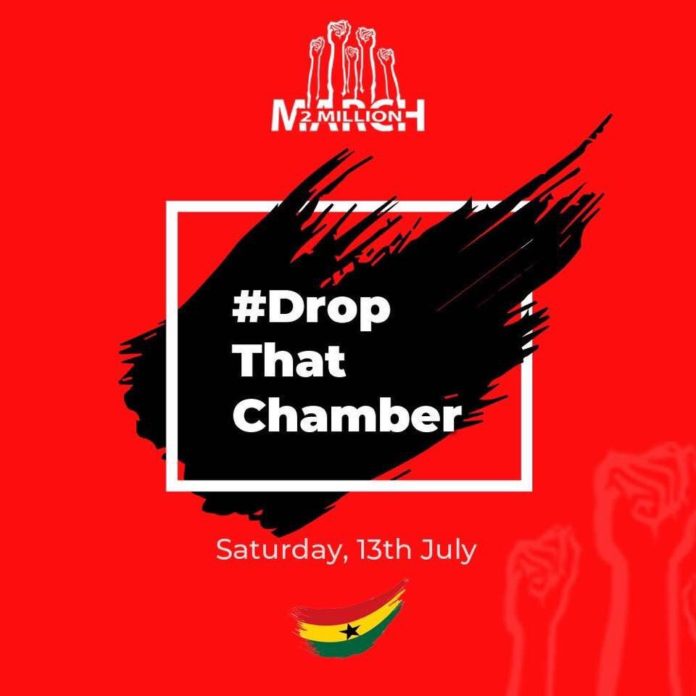 It’s been a year since the #Dropthatchamber campaign took off and got parliament to suspend its plan of building a new parliamentary chamber. To commemorate this momentous success of civic activism, I spoke to some principal actors who took part in that historic campaign.

For Nuong Faalong a journalist and activist, the campaign renewed her hope in the ability of Ghanaians to put politics aside and collectively demand for change. She said the huge numbers of petitioners and the caliber of people across all political parties who came together willingly to support the campaign was humbling. “The #Dropthatchamber showed that a third political force is possible in Ghana.”

On her part, Rasheeda Adams, a Real Estate Developer and Broker explains that the success of the #dropthatchamber campaign truly opened her eyes to what people can achieve as a collective. For her, what made the #dropthatchamber movement unique and effective was that Ghanaians from every facet of society put aside their personal politics and came together to make a bold and clear statement that they were no longer going to look on unconcerned for state resources to be used for mundane things like building a new parliamentary chamber which parliament didn’t need. Adams said the #2MillionGhanaiansMarch movement could not have been ignored.

“We were simply a mouthpiece for average Ghanaians who are tired of the wanton waste of resources by government. We got what we wanted, the project was put on hold. We hope it remains that way, for if any government tries to rekindle the idea, I am without doubt that citizens will once again rise up against it with just as thunderous a roar, as we did before,” she assures.

Della Russel Ocloo, a journalist working with the Graphic Communications Group also shares her views on the one-year commemoration of the #Dropthatchamber campaign. It was one of the most non-political campaigns she has ever seen. She expressed her excitement about making her voice heard on the issue since the Chamber had no economic significance for the country’s socio-economic development. Ms. Ocloo applauded the initiators of the campaign and hopes the group and all relevant stakeholders will continue to blaze the trail and let our voices be heard on national issues.

This piece will be incomplete without mentioning one person – Ernesto Yeboah. He is the leader of the Economic Fighters League (EFL). He believes that something had to be done about the planned new chamber agenda and it needed to be done urgently. The idea was to keep the energy around the issue up until the planned protest the following week. He got arrested right within the current Chamber for this activism. For Hardi Yakubu, the Fighter General of the Economic Fighters League , it meant that once young people commit and mobilise themselves, the power of the people can defeat the system.

During the campaign, Ghanaians were urged to go to Parliament and register their displeasure. On 5th July 2019, while proceedings were on going in the House, KT Hammond, MP for Adansi-Asokwa, made a comment that MPs would not sit under trees. It was after this that Ernesto Yeboah who was observing deliberations in the chamber chanted #dropthatchamber. He and two other members of the Economic Fighters League were immediately arrested and manhandled by the security personnel and sent to the Parliament police station, they were later transferred to the ministry’s police station. It took the intervention of lawyer Francis Xavier Sosu to get the bail for Yeboah and Abeku Adams. The announcement on the suspension of the project came a day after the incident. Civil disobedience and mass popular power had won and saved the nation $200 million.

Democracy is a government for the people. What happens in Ghana largely is that our elected leaders sit in parliament to represent their party’s interest above the interest of the common man who voted for them. These parliamentarians take decisions on the people’s behalf without proper consultation with the electorate who gave them the power.

Romeo Adzah believes the #Dropthatchamber campaign is a testament of what a mobilised youth can do to effect change and make their voices heard in any society. He believes young people have the agency to create the world they want by holding those in leadership accountable for their stewardship for the good of all ,especially the underprivileged.

The campaign was not only championed by Ghanaians from all walks of life. Even in parliament itself, there were opponents of the proposed chamber. John Jinapor, Member of Parliament for Yapei Kusagwu is reported to have said: “We don’t even need 275 MPs; this chamber is enough to accommodate all of us.”

The campaign drew so much opposition from all segments of society. Even some members of the security services joined in the online protest expressing their disapproval of the proposed chamber. Lance Corporal Lincoln Isaac Wassah of 2 Recce Squadron in Sunyani was seen in a video supporting the #Dropthatchamber campaign. For challenging the status quo as an officer, Lance Corporal Wassa was stripped off his rank and sentenced to 90 days in the guard room with hard labour.

The acting Director of Public Affairs in parliament, Kate Addo issued a press release to announce the termination of the proposed plan by the lawmaking body to build a new chamber. The statement read “the Parliamentary Service Board at its meeting on 8th July, 2019 considered the burning issue of a development of the proposed new parliamentary chamber. She explained further the board had reviewed representations by well-meaning Ghanaians and had taken it off its present agenda. The release although stated clearly that the development of the new chamber block and offices shall however remain an essential and integral part of the future plans of the legislature which she further explained it was a bid to provide a strong, accountable, responsive and transparent parliament to serve the purpose of parliament .”

At a time where citizens where faced with a no bed syndrome in the hospitals, bad roads and bridges in some communities and the lack of some other basic necessities of life , building a new chamber to make elected parliamentarians more comfortable wasn’t a priority when their people were and are still facing myriad of developmental issues that needed urgent attention.

Contributing to the discussion on the proposed new parliamentary chamber on the floor of the house, the Adansi Asokwa Member of Parliament, KT Hammond said “… We won’t have democracy without parliament. Mr. Speaker, I’m sure the press will take me on this, Parliament won’t sit under trees ,so Mr. Speaker, this whole matter should be brought to the fore, let it be debated and then ultimately a decision one way or the other be made.”

For us young people in Ghana, we’ve become so comfortable with systems that seek to oppress us, take Reginald Sakyi Brown’s one man protest to get the University of Ghana Medical Center opened through the hashtag #OpenUGMC. Mr. Brown went to a sod-cutting ceremony of the First Lady, Madam Rebecca Akufo-Addo in Korle Bu Teaching Hospital where he held a placard that read #OpenUGMCnow to express his disappointment over the politics of abandoning the completed multi-million dollar infrastructure.

Look at the different protests held worldwide by young people to demand accountability from those in power i.e. the origin of the Arab Spring. People power takes different forms. In 1948,Nii Kwabina Bonnie III who was the then chief of Osu Alata called for the boycott of foreign goods. For a people who have a history of getting results through questioning the authority of those in power, the lack of interest of many Ghanaians about happenings around them leaves much to be desired.

How are you being a responsible citizen in your community? Did you know it was a group of young women who initiated and implemented the #dropthatchamber campaign with the help of their male counterparts? Young people should always remember that they have a stake in the present and the future of this country. We should work towards responsible citizenship and nation-building rather than partisanship. Let us choose Ghana all the time in our daily engagements.

For citizens in communities that lack basic amenities like good drinking water, health facilities, good roads ,education, among others, it is important to demand better accountability. Do not let your Member of Parliament take you for granted because he wants an easy way out to win elections. Let your leadership use their offices to lobby for developmental projects. Let them use their MPs Common Fund to develop your communities; hold them accountable and demand better living conditions for you and your people.

To our Members of Parliament, know that once we have pregnant women sleeping on floors in our hospitals and school children still learning under trees, there is no way we as citizens will look on and let you have your way with building a new luxurious chamber.

The words of Dr. Oduro Osae, a governance expert, sum up the sentiments of the people: “It is clear that the issue of the chamber was not well thought through and they dare not introduce it again because the people will come after them.”

Written by Bilkis Nuhu Kokroko, the Communication Director of the Economic Fighters League. She is also one of the women who initiated the #Dropthatchamber campaign