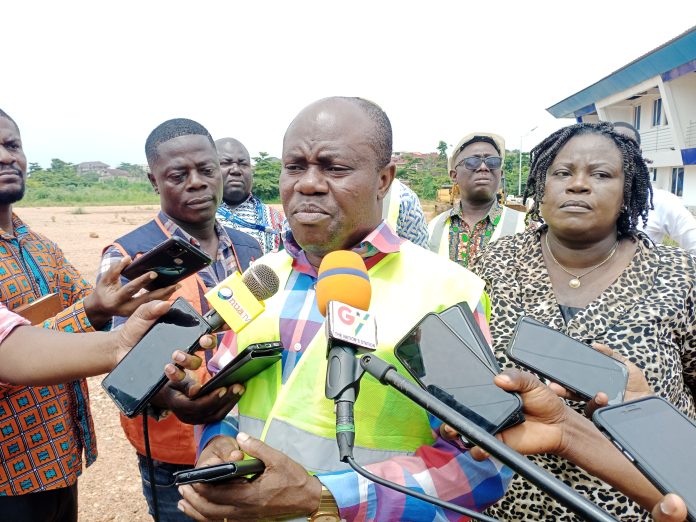 The Electricity Company of Ghana has warned of an imminent power and water crisis within the Greater Kumasi areas if stringent measures are not instituted to check encroachment on lands bordering transmission sites and power lines.

The power distributor is also worried as the situation is adversely affecting its operations, including regular maintenance works.

Officials of the ECG are seeking an intervention from the Ashanti Regional Security Council (REGSEC) as they lead its chairman, Simon Osei-Mensah on a tour of some of the encroached sites.

Ashanti Regional Manager of the ECG, ING David Asamoah told reporters that, “We have seen that people have encroached our network; our substations, lines, cables. People have built and are even cooking on our cables…these are not the normal voltage. They are 11000 voltages, 33000 voltages and so on…”

“For instance in Adoato, that’s the one that gives us water in the entire Ashanti Region. So if that cable fails then it means that there will be no water for Ashanti Region and about a quarter of Ashanti could be without power,” he said.

Meanwhile, Grace Garshong, the communication manager of the ECG in the Ashanti has said the situation is not very pleasant describing it as a “security threat”.

Garshong told Asaase Radio on Thursday that some residents have “occupied our substations and our lines and it is very dangerous. So we had to sensitise them so they know that it is a security threat to them…”

She said the encroachers have been given up till the end of this month (June) for them to vacate the areas.

“We’ve given them till the end of the month and we’ve said that if they move, we’ll move in and demolish.”

However, Nana Yaw Akwada, the founder and executive director of the Bureau of Public Safety has said the laxity at which these transmission companies are working on addressing the situation is not tenable.

Speaking on the Big Bulletin, Akwada said “This phenomenon has been known to these two entities (ECG and GRIDCo) for a long time… they have themselves to blame…we sit down and allow people to encroach such facilities and to make matters worse we give them time to vacate those places. It is unheard of anywhere.”

“People are endangering their lives. In a country where it is a crime to commit suicide, we see people putting their lives and that of their families settling under these grids and when we see this we have the audacity and the laxity to say we are giving them time to vacate.

“In the first place, it should never have happened. So we would want to advise them that they [ECG and GRIDCo) should move in and remove these encroachers as soon as possible. They must create that sense of urgency in the minds of the public…”

Meanwhile the Ashanti Regional Security Council says an emergency meeting will be held to deal with the situation.

Its chairman and Regional Minister Simon Osei-Mensah said, “we are going to invite all the individuals and other stakeholders to find a lasting solution to this problem”.

Go for the best in smart bands with the new Huawei...