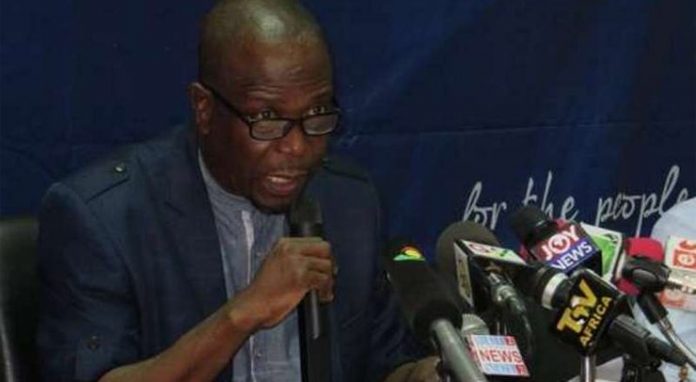 The move to make the positions of Metropolitan, Municipal and District Chief Executives (MMDCEs) elective appears to be gaining momentum.

This is because the Interparty Advisory Committee (IPAC) has reached an agreement with stakeholders to hold the District Level Elections and Referendum to amend Article 55 (3) on the same day.

IPAC is also expected to announce the timelines for the District Level Election and the Referendum and other related activities in due course.

This was after the Electoral Commission concluded a stakeholders meeting yesterday, February 6, 2019, under the aegis of IPAC, with representatives of the various political parties, development partners and a number of Civil Society Organizations as well as senior members of the commission attending the meeting.

The Head of Communications of the EC, Eric Kofi Dzakpasu, made the disclosure to the media in a press statement after deliberations and discussions from the stakeholders meeting under the support of Inter Party Advisory Committee (IPAC) meeting held on Wednesday, February 6.

He also stated that, “ahead of the referendum, the EC has drafted a constitutional instrument to regulate the referendum. This will be discussed with the AG’s Department and hopefully laid before this session of parliament”.

Mr. Dzakpasu added that the deliberations of the meeting were centered on issues pertaining to the 2018 referendum, the Ayawaso West Wuogon Constituency by-election, 2019 District Level Election (DLE) and referendum, updates on Representation of the People (Amendment) Act (ROPAA) and other matters which led to agreement and key decision making.

Addressing the press, he mentioned that, “ROPAA committee has convened its meetings beginning with the Greater Accra Region of Ghana and is consulting a number of stakeholders including political parties, civil society organizations, the clergy, and media amongst others and will move to other regions”.

The committee will later embark on international consultations to collate views of Ghanaians abroad and to learn from experiences of other electoral management bodies to present a comprehensive report by the end of May 2019.

“The commission plans to develop a committee to regulate the activities of political parties in this area,” he added.

He reiterated that “the Commission noted that a number of audited accounts received to date fall short of international standards and entreated political parties who haven’t submitted their account returns and audited accounts to do so by the 13th of February this year”.

The commission through Mr Dzakpasu has called on political parties to address the issues of vigilante groups within their respective parties to avoid the occurrence of the unfortunate incident that took place at the Ayawaso West Wuogon Constituency by-elections in the future.P