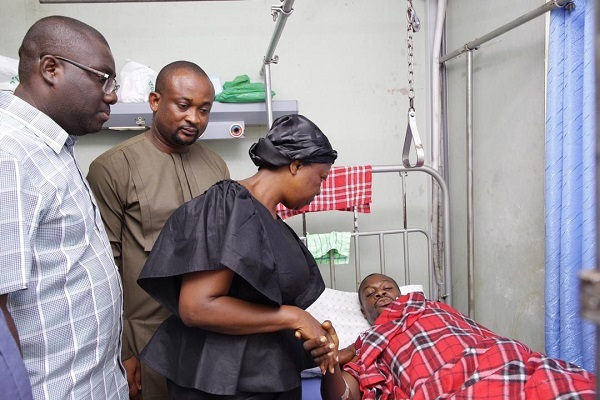 The newly elected Member of Parliament (MP) for Ayawaso West Wuogon, Lydia Seyram Alhassan, says she bears no grudge against the opposition National Democratic Congress (NDC) MPs who made disparaging remarks about her when she was being sworn into office in Parliament on Tuesday.

She was highly disappointed in the NDC female MPs who took part in the name-calling, as well as outright insults hurled at her on the floor of the august House.

“I am surprised the ladies in Parliament, who want more ladies to join leadership, will do this,” she said yesterday when she visited some of the victims of the Ayawaso West Wuogon by-election violence at the hospital.

“I don’t know what their interest is but I will say that I have forgiven them and I ask our good Lord to forgive all of them. Time will heal my wounds and time will tell my story,” the MP said.

The Minority NDC MPs have come under pressure to apologise to Lydia  Alhassan for their action last Tuesday during her swearing-in which many have described as ‘unparliamentary,’ ‘reckless’ and insulting.

Their treatment of the widow of the late Emmanuel Agyarko has been condemned by many people.

The NDC MPs, led by the Minority Chief Whip, Mohammed Mubarak Muntaka, walked out of the chamber of Parliament before the new MP could be sworn into office.

In what could be described as defying rules of indecency, the Minority members, clad in black, displayed placards with the inscription “Bloody Widow” before walking out of the House.

The NDC MPs claimed the by-election which brought the NPP candidate to power was characterised by ‘brutal violence’ which led to the maiming of some supporters of the opposition NDC, and as a result refused to be part of the inauguration of a legislator produced from a ‘violent election.’

In the ensuing heat, former First Lady Nana Konadu Agyemang Rawlings, who is the wife of the NDC founder, Flt. Lt. J.J. Rawlings, lambasted the NDC MPs for their uncouth behaviour on the floor of the House on Tuesday.

She stated: “I have watched with shock and consternation the callous and maliciously orchestrated attempt by members of the Minority in Parliament to belittle, lampoon and ridicule the newly elected Member of Parliament for Ayawaso West Wuogon, Ms. Lydia Seyram Alhassan.”

“It is sad that this shameful display was carried out in no other place than the Parliament of Ghana – 26 years after Ghana made global commitments towards respecting women and promoting the involvement of women in politics,” she added.

The former First Lady, who has broken ranks with the NDC continued: “If women who engage in politics are lampooned in the way and manner witnessed in Parliament on Tuesday, then no number of safe seats would be sufficient in improving the dwindling fortunes of female politicians.”

She called on the leadership of the NDC to do what is honourable by apologising to Ghanaians generally, specifically to Ms Lydia Alhassan and the good people of Ayawaso West Wuogon.

Dean of Communication Studies at the University of Ghana Prof Audrey Gadzepko also added her voice to calls on the NDC members to apologise to the new MP for their ‘shameful’ action.

“The Minority was out of line. If the Minority will take time to reflect and want women to be part of politics, they will apologise. It is important that members of society teach people how to disagree in a civilised manner,” she told Accra-based Joy FM.

Dreaming NDC not coming back to power in 2020 – Akufo-Addo