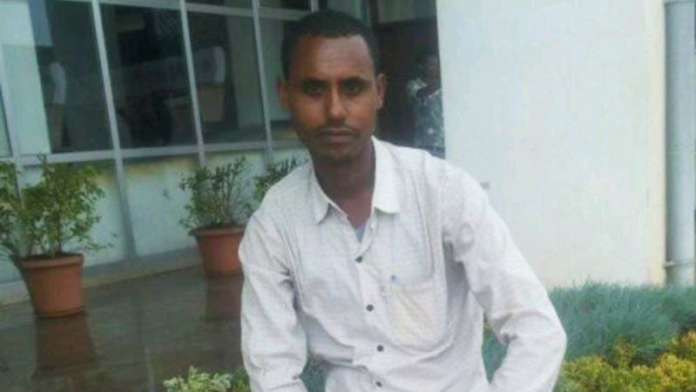 The shooting dead of Kitilaa Guddata has left his family in shock.

The 32-year-old high school teacher was among the latest casualties in the conflict between government forces and rebels in Ethiopia’s Oromia region.

The violence centres around demands by an insurgent group for the “liberation” of Oromia – a vast swathe of land that is home to Ethiopia’s largest ethnic group, the Oromo – and the subsequent security crackdown.

It has led to civilians being caught in the crossfire – including Mr Kitilaa. His family allege that he was killed after about 10 police officers took him from his home in Sekela town on the night of 19 November.

Frantic search
“His wife – the mother of his two children – begged them to take her instead, but they told her he would be back after some questioning,” said a relative, who spoke to BBC Afaan Oromoo on condition of anonymity for fear of reprisals.

The teacher never returned. His family said that after a frantic search they found his body, along with those of two other people, a couple of days later.

“There was a river and they killed him on a rock next to it. He was shot from behind; his hands were tied at the back. It looks like they used him as a target for shooting practice,” the relative alleged.

IMAGE COPYRIGHTGETTY IMAGES
image captionProtests against human rights abuses in Oromia have taken place in the UK and elsewhere
Attempts to obtain comment from the Oromia Special Police Force were unsuccessful, but Oromia regional government spokesman Getachew Balcha said he was unaware of the security forces falsely accusing people of being allied with the Oromo Liberation Army (OLA).

“Measures are taken only against those whose crimes are known and exposed by the people,” he told BBC Afaan Oromoo.

“But anyone found to have committed a crime, including police members and government officials, would be held accountable,” he added.

The Oromia Special Police Force has increasingly become involved in operations aimed at quelling the insurgency in the southern and western parts of Oromia after an unspecified number of soldiers were hastily redeployed to the Tigray region following the outbreak of conflict there in early November.

It highlights the mounting security challenges in Ethiopia, ending the euphoria that had gripped the nation when Prime Minister Abiy Ahmed rose to power in April 2018 and won the Nobel Peace Prize the following year.

He introduced sweeping reforms to end decades of authoritarian rule, including unbanning political parties and rebel groups, releasing thousands of detainees, and allowing exiles to return.

But one of its top military commanders, Kumsa Diriba, who is also known as “Jaal Maro”, failed to reach a deal with the government over the disarmament of fighters.

After also falling out with the OLF, he continued the insurgency for what he calls the “liberation” of Oromia under the banner of the OLA from his forest hide-out in the west.

At the time in 2018, the security forces promised to crush his group within two weeks, but more than two years later they are still battling the insurgents.

‘Buried without family knowing’
Meanwhile, reports of civilian casualties mount. Another case is that of Galana Imana, a father of two.

In a BBC Afaan Oromoo interview, his younger sister Chaltu Imana said he was arrested by nearly 20 armed officers at his home in Ambo town, about 100km (60 miles) west of Addis Ababa, in November.

IMAGE COPYRIGHTGETTY IMAGES
image captionHuge crowds turned out at Oromo Liberation Front rallies after a ban on the group was lifted in 2018
Ms Chaltu said she desperately searched for him for four days until she received news that police had found a body by a river. She then went to a local police station, where officers confirmed they had found a body and buried it.

“After some deliberations they asked us to bring his photo and describe how he was dressed the night he was arrested. Later they confirmed to us that the man they buried matched the photo and the description we gave them.

“They told us to go home and mourn him in the absence of his body. We had no option,” she said, adding that the officers confirmed that her brother had died of a gunshot wound.

“We only know about his arrest. We don’t know what his crime was, we don’t know why they preferred to kill him rather than take him to court,” Ms Chaltu said.

Her brother had only been politically active in the OLF, having served on a committee to welcome leaders who had returned from exile in 2018, she said.

Ethnic Amharas killed
The exact number of casualties from the conflict is unclear, but the state-linked Ethiopian Human Rights Commission said it had recorded the alleged killing of 12 civilians by the security forces in Oromia in November alone.

IMAGE COPYRIGHTOROMIA POLICE COMMISSION/FACEBOOK
image captionThe Oromia Special Police Force is helping the military to quell the insurgency
He emphasised that OLA fighters have also been accused of targeting civilians.

Their victims include Amharas, the second largest ethnic group in Ethiopia and its historic rulers. More than 50 of them have been killed in western Oromia’s Horro Guduru zone since November, in an apparent attempt to drive them out of the region.

The zone had been largely peaceful. The attacks suggest that the OLA has now moved in, and the killings have shocked people and raised fears of causing ethnic tensions.

According to government accounts, 13 Amharas were reportedly killed in the zone’s Amuru district in November. In a deadlier attack in the same month, at least 34 Amharas were gunned down after OLA fighters called them to a meeting in a school compound in Guliso district.

The BBC also spoke to two residents of Abbay Choman district, who witnessed the killing of seven Amharas in December.

Competing political visions
Residents said the gunmen, whose identities they were unsure of, used a loudhailer to summon both Oromos and Amharas to a meeting on the evening of 8 December.

“There were eight armed men, they had long hair, their faces were covered, they asked for residents who were Amharas to identify themselves. They told the rest of us to go home and took away about 10 of those who stood up,” an Oromo resident said.

“We were waiting for their release the whole night, they didn’t come. We found seven bodies the next morning,” he added.

media captionHow an Oromo musician’s killing in 2020 caused widespread anger
While it is unclear what exactly the OLA means by the “liberation” of Oromia, the main opposition parties in Oromia are demanding greater regional autonomy, believing it to be the best way to guarantee the political, cultural and language rights of different ethnic groups.

But their critics, especially urban elites with a more cosmopolitan outlook, fear this could result in ethnic identities becoming more entrenched, and Ethiopia disintegrating into ethnic fiefdoms.

Many Oromos feel Mr Abiy is leaning towards the latter view and wants to centralise power. This perception grew especially after he dissolved the ethnically based ruling coalition in 2019 and gave his newly formed Prosperity Party (PP) power at both the centre and in Ethiopia’s 10 regions.

The same argument is part of the conflict in Tigray.

‘Enemy of the people’
In Oromia, the security forces have also arrested almost the entire leadership of the two main opposition parties, the OLF and Oromo Federalist Congress (OFC), accusing them of fuelling violence to advance their cause for greater autonomy. They deny instigating violence.

Their detention has led to many opposition supporters concluding that the political space Mr Abiy opened in 2018 had now closed. This has resulted in sympathy, if not support, for the OLA growing, especially among youths impatient for change.

The OLA has mainly attacked government officials and police officers – including commanders – in small towns and villages as part of a strategy to make them ungovernable for Mr Abiy.

IMAGE COPYRIGHTERIC LAFFORGUE/ART IN ALL OF US
image captionTraditional leader Kura Jarso has condemned the insurgency
However, it has also created a culture of fear among Oromos. Armed men raided two banks in Hagamsaa village in December and set ablaze an ambulance, which was taking a pregnant woman to a medical facility to deliver her baby, and a private vehicle in nearby Shambu town. Locals suspect that the rebels were trying to obtain money and vehicles for their insurgency.

The OLA is strongest in southern Oromia, which borders Kenya. The group suffered a major blow there in December when a powerful traditional leader in the region, Kura Jarso, denounced it as an “enemy of the people” after accusing its fighters of killing civilians, raping women and stealing cattle.

The conflict has also spilled into Kenya, where tens of thousands of Oromos live and are loyal to Mr Kura. In November, residents in the Kenyan town of Moyale said Ethiopian troops had crossed the border ransacking neighbourhoods and taking away 10 people they accused of sheltering members of the OLA, also referred to as OLF-Shane.

Mr Abiy visited the Kenyan side of the border with Kenya’s President Uhuru Kenyatta in December.

In his speech, he lumped the Oromo rebels with Somalia-based militant Islamist group al-Shabab, which is the main security threat in Kenya. He said both should be “eliminated”, although there is no evidence linking the ethnic nationalists to the Somali militants.

It was a further sign that Mr Abiy intends to continue taking a hard-line approach to tackling conflicts in Ethiopia.