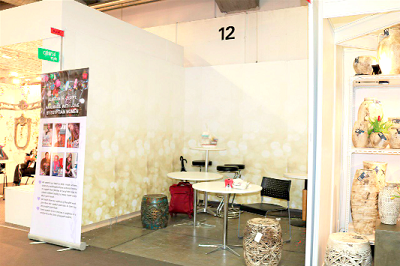 Ghana will for the third time pay the full cost and associated penalties for failing to show up at the internationally acclaimed consumer goods trade show, Ambiente, in Frankfurt, Germany.

This follows the failure of officials of the Ghana Export Promotion Authority (GEPA) to notify the organisers of the show, Messe Frankfurt Exhibitions GmBH, of the authority’s inability to attend the fair and leaving empty a 16-metre square booth costing €3,500 that was allocated to it.

The booth is currently serving as a waiting area for other exhibitors, including the Indonesian Export Promotion Agency which is using the space as a meeting and dining area.

The organisers have hinted that the country could be expelled from participating in future trade shows it organises.

When contacted, the Deputy Chief Executive of GEPA, Mr Samuel Dentu, explained that the space allotted to GEPA was woefully inadequate, “because GEPA cannot go to Ambiente alone without its clients. That would be counter-productive for us, since we work on behalf of our clients,” he said.

The fair, said to be the world’s leading consumer goods event, showcases a wide variety of products ranging from home decor, decorative pieces and dining and living room products, among others.

Other items traded cover products in fashion and accessories, home and outdoor textiles thus making it a one-stop shop for international bulk buyers and giving them the opportunity to place timely orders.

Speaking in an interview with the Daily Graphic, the West African Sales Representative of Messe Frankfurt, Ms Omon Itoya-Abanokwu, expressed regret at the turn of events.

She told the Daily Graphic in Frankfurt that after a series of engagements in November 2018, GEPA had signed a contract agreement for space to be allocated to it and so as things stood now GEPA would be required to pay the full cost for the exhibition space, “since they did not cancel the allocation within the specified period.

“It was, therefore, disappointing to see the space unoccupied, a situation the organisers consider inappropriate since it goes to create a wrong impression for both visitors and exhibitors,” she said.

“Messe Frankfurt often feels bad when it has to charge agencies and exhibitors for not showing up but a contract is a contract. Once it becomes binding on the parties, GEPA would have to pay,” she said.

Asked of the implications on GEPA’s participation in future fairs organised by Messe Frankfurt, Ms Abanokwu said the inconsistencies displayed by Ghana had tarnished its reputation at the fair and, “while management of the fair reserved the right to expel any country or exhibitor from participation, the issue would be reviewed by the Ambiente team,” she said.

Mr Dentu told the Daily Graphic, however, that during initial discussions with organisers of the fair, the leadership of GEPA made it categorically clear that a 16 square metre space for Ghanaian exhibitors “would not serve our purpose, given the number of exhibitors whose crafts we intended to showcase”.

“GEPA’s mandate is to promote exports, thus we found it counter-productive for GEPA to take up the space which was inadequate,” he claimed.

Mr Dentu said also that GEPA used fairs such as Ambiente to leverage access into foreign markets for Ghanaian handicraft exporters, and that “we intend to sort out issues with Messe Frankfurt as soon as practicable so that GEPA would mobilise to ensure it is well represented at the next fair.”

Asked whether the export promotion authority would make the necessary payments when a debit note was sent to it, Mr Dentu said he had not seen any signed document that committed GEPA to pay for empty exhibition space though it was unable to make it to the fair.

“Like I said, I don’t know of any payment that GEPA has made in the past for empty stands in its failure to show up because we have been in office for only a half year,” Mr Dentu explained.