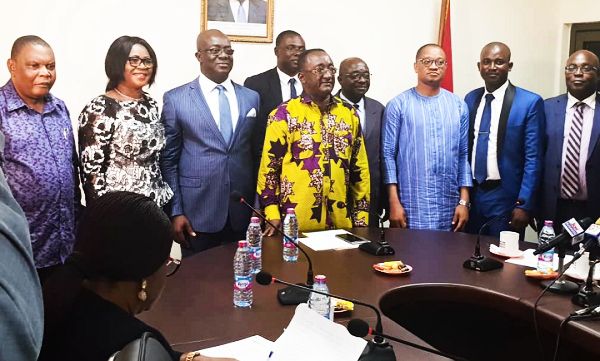 For many youngsters around the country, it seems hard to believe that today’s Cocoa Processing Company Limited (CPC) was once the toast of the nation.

And they are not wrong.  For almost two decades, virtually nothing good was reported about the company in the media as it was riddled with various degrees of challenges – the biggest being foreign exchange losses and limited bean supply to grind.

Within the period, CPC earned the contemptuous tag of a cocoa grinder that is a pale shadow of its glorious past, synonymous to losses and keeping its financial statements from the public.

Rather than grinding its own beans, CPC resorted to tolling for counterparts after being unable to purchase beans at arm’s length.

While its shareholders, majority of whom became so out of nationalistic sentiments, counted their losses, the Ghana Stock Exchange (GSE) saw CPC as non-compliant to listing rules and, therefore, a bad influence on other equities.

As such, the exchange suspended the cocoa processor from trading on the bourse for more than one year.

In fact, delisting was imminent until earlier this year when CPC was able to right its wrongs to be able to escape.

Now, the company is on a recovery path with vim to reclaim its lost glory and spark up the euphoria that herald its establishment in 1965.

In the 2017/18 cocoa season, the company broke and set its own record. For the first time in 53 years, CPC processed 25,089 tonnes of cocoa beans, its Managing Director, Nana Agyenim Boateng I, said in an interview.

“Previously, there were no beans to process because Ghana Cocoa Board (COCOBOD) was not prepared to support us, but now the government has stepped in and it is helping,” said on February 11.

That arrangement by the national cocoa regulator, which owns 57.73 per cent of the cocoa grinder, gave it comfort to reignite its innovative self and launch on to higher targets.

In December last year, it took aim at the country’s soaring love for artisanal chocolate, which is fueling a US$45 million per annum chocolate import bill. The company introduced its version of the artisanal chocolate under its Golden Tree brand but with different flavours.

The message behind the launch of the Golden Tree: “If it is the almonds, walnuts, pistachios and macadamias, which (Ghanaian) consumers are looking at as something out of the world, then CPC is challenging itself to say that it is doable,” Nana Boateng I said.

With these types of chocolate being regular items in hampers, Nana Boateng I was optimistic that the CPC brand would soon replace the foreign brands in supermarkets and major shops nationwide.

He explained that the company was also conscious of the impact of packaging on brand attraction and as such had gone the extra mile to ensure that the new products were attractive from the outside and finger-licking when tasted.

“If you have it in this form,” he said, pointing to the packaging of CPC’s pistachio and almond brand of chocolates; “why do you bother going for the foreign ones?

“So, when it comes to the packaging, we are marching it,” he said, explaining that market response has so far been great.

The company has also been contracted to produce cocoa products for schoolchildren under the School Feeding programme, an initiative meant to introduce the next generation to cocoa consumption.

A Ghana beyond aid

As is the case with such developments, CPC’s comeback journey started from the boardroom, having been inspired by a national agenda to process 50 per cent of Ghana’s annual cocoa output, which averages 850,000 tonnes.

Around 2017 when President Nana Addo Dankwa Akufo-Addo first announced his government’s intention to process 50 per cent of Ghana’s premium cocoa beans, CPC approached the Ministry of Agriculture on how it could leverage the policy to return.

It was also an opportunity for the ministry and COCOBOD to examine how CPC could aid the realisation of the agenda.

Beyond being a majority state-owned entity, CPC has capacity to process 65,000 tonnes of cocoa beans per annum, making it a critical part of any agenda to increase domestic cocoa processing.

But with a checkered history, the company’s MD recollected that the concern was obviously ‘what is it that makes it different now?’

“We had to justify how we will not be the same,” he said.

And after series of discussions, the government, through the able assistance of the Minister of Agriculture, Dr Owusu Afriyie Akoto, agreed to support the grinder with beans, Nana Boateng I said.

This reduced the company’s losses, Nana Boateng I said, although he declined to give details in line with listing rules.

CPC currently has two factories, of which the maiden one, a 34,500-tonne capacity grinder, is 53 years old.

Nana Boateng said a machine audit conducted as part of the revival process showed that the two factories have a combined efficiency rate of 74 per cent.

“When we looked at that and the figures it was going to give us, we realised that although our huge debt will still be there, our profit and loss (P&L) will be good if we are processing on our own,” he said.

Now, with government support for the company unflinching, the MD said the next step was to ramp up on value addition.

“A case in point is when we do the paste into semi-processed level of liquor, butter cake and powder, the margin is higher than when it is raw,” he said.

When it is further processed into finished products, he said “that is another huge line.”

“You need one tonne of butter and 848 kilos of mass to do 4.68 tonnes of chocolate. So, even if we are looking at it at it from the CPC level, one tonne of chocolate is equivalent to 100 cartoons.

“That is why we are seeing it that the added value is the place to go,” he said.

The Africa Development Bank (AfDB) estimates that although Africa produces almost 75 per cent of global cocoa output, it enjoys only five per cent of the US$100 billion chocolate industry.

Nana Boateng was hopeful that the momentum that is brewing in CPC would continue into the coming years to help create more jobs and increase value addition from the cocoa angle.

He said 40 more people have so far been employed, thanks to the coming onboard of the artisanal chocolate, which is now under a new department.

The School Feeding Programme has also created additional jobs for persons in the packaging business.

Going forward, he said the company would work to create another department to handle chocolate spread by utilising the availability of groundnuts to produce some new and existing products.

Asked what his message was to shareholders, Nana Boateng I said “they have had patience with us for some time now, they should continue to trust us.”

With assistance from the Minister of Agriculture, Dr Akoto, he said CPC has signed an online marketing agreement with JD, China’s second largest online trading platform, to showcase its products to the world.

“If we have just one per cent of the Chinese population, which is around 14 million, you can imagine what it means,” he said.

He added that CPC had also secured a supply contract with Morocco’s second largest processor to supply compound chocolate to them.

Another agreement is also being finanlised with Air Namibia to allow them to serve the company’s products to passengers.

With these in place, he said the future looked bright and thus called on stakeholders to support the company to sustain its return.

For now, though, let us hail the revival of a company whose success would bring the country closer to the US$100 billion chocolate pie.

Like Nana Boateng I said “chocolate is not only a confectionary but a medicine and you can only have it if you are tasting something which is 100 per cent premium – without additives.”

Ghana is prided as the grower of the world’s premium cocoa bean and for that beans from the country fetch a premium price in the international market.