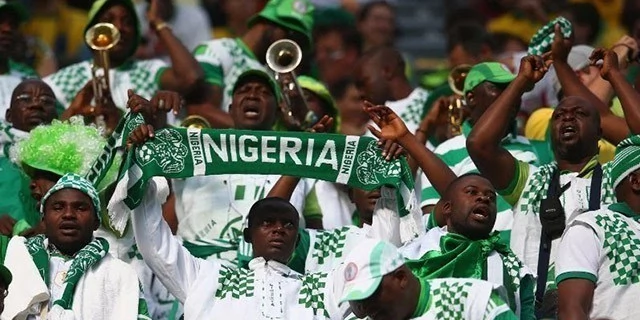 The Nigeria Football Supporters Club (NFSC) has revealed plans to embark on a seven-day fasting and prayer session to enable Nigeria to defeat Ghana in the 2022 FIFA World Cup playoffs.

Nigeria declares fasting and prayers ahead of World Cup playoff against Ghana
The two West African rivals will come face to face later this month to battle for a ticket to the World Cup in Qatar.

The Black Stars will host the Super Eagles at the Cape Coast Stadium before travelling to the Moshood Abiola National Stadium in Abuja for the return fixture.

Nigerian football supporters
The first leg is scheduled for Friday, March 25, 2022, while the second leg will take place on Tuesday, March 29, 2022.

Ahead of the game, the Chairman of Nigeria’s national supporters’ club, Samuel Ikpea, called on all Nigerians to take part in the fasting and prayer.

“Furthermore, we charge Nigerians to join members of the NFSC for a 7day fasting and prayer session, starting from Thursday 17th to Wednesday 23rd of March 2022 ahead of the match,” he said, as quoted by Blueprint.ng.

“We are all aware of how important the World Cup Qualifiers mean to both countries, and Africa Football as a whole, we therefore use this medium to call for calmness among Fans before and after the matches.”

Nigeria’s Super Eagles
He added: “As the ultimate face and father of Nigeria’s football supporter ship, the NFSC want the corporate world, sports philanthropists and other genuine stakeholders to rally around the Super Eagles through ensuring massive support.

“The Supporters Club needs adequate moral and financial support to enable thousands of our members to be at the Cape Coast Stadium on March, 25. There is a need for adequate travel arrangements from those who truly love Nigerian football. We have the pedigree to make Super Eagles feel at home before, during and after the match in Cape Coast.”

Ikpea also noted that, in an effort to promote sportsmanship, a friendly game between Nigerian supporters and their Ghanaian counterparts will be played in Accra on March 22, 2022.

“I will accept the verdict of Ghanaians on 7th December” –...