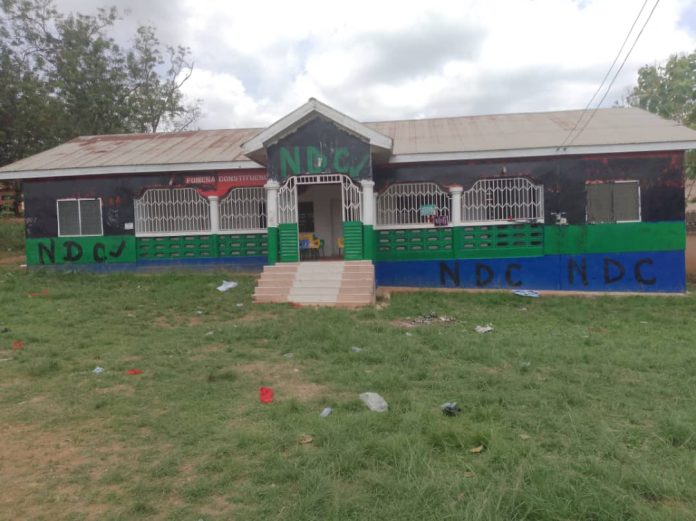 Some angry supporters of the ruling New Patriotic Party, NPP, in the Fomena Constituency of the Ashanti Region have staged a protest against the leadership of the party.

Monday’s demonstration was in response to failed attempts by the leadership of the party to conduct polling station elections as the party seeks to reorganize its base across the country.

The protesters, some of whom wore red bands and gears, besieged the party office, shortly after a street march. Some of them who were seen with paints started changing the traditional colours of the ruling party from Red, White and Blue into Red, White, Green and Black – the colour of the opposition National Democratic Congress (NDC).

Photos of the former President John Dramani Mahama, were fixed at portions of the building.

Others held placards with inscriptions such as: “No unopposed in Fomena”, “Let the NPP Constitution work”, “Don’t reward Asiamah and his supporters for disloyalty”, among others.

Convener of the group Emmanuel Domah said: “We are opposing the imposition of an independent candidate in the Fomena Constituency. Also, the constitution of the party is not being followed strictly. Again, some party faithfuls who helped Nana Addo to win the general elections are being sidelined, and the party is rather favouring those in the camp of the Independent Member of Parliament for this area, Andrew Amoako Asiamah”.

The protesters further called out some members within the party leadership of scheming to bend the rules to favour their sitting MP Hon. Andrew Kwaku Asiamah who won the 2020 parliamentary elections when he broke ranks to contest as an independent candidate.

“I blame John Boadu, another protester said. “It is as if he is not following the happenings in the NPP. If he and Wontumi, our Regional Chairman don’t work to resolve this issue we will defect to the NDC.”