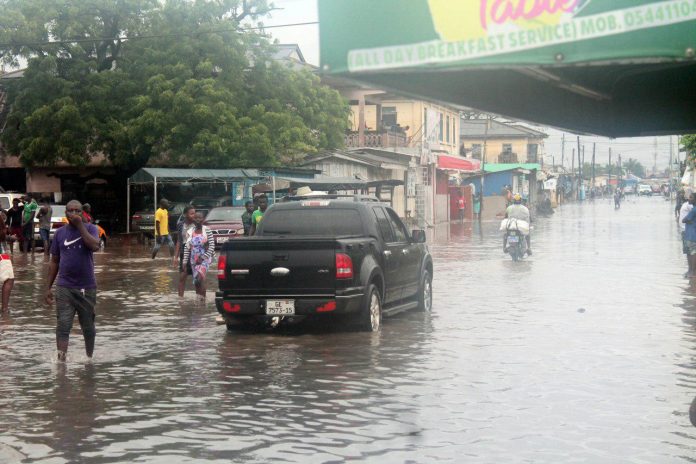 At least five persons have been confirmed dead after long hours of rains in Ghana’s capital Accra on Sunday, disaster officials said.

A six-year-old child was found dead in suburban Sowutuom during the rains, officials of the National Disaster Management Organization (NADMO) disclosed to Accra-based Citi FM.

A middle-aged man was also found dead at Ablekuma, while another was found at Odorna in Adabraka, all in the Greater Accra region.

There is also a report of a missing military pickup with passengers in its bucket at Adjei Kojo in Ashaiman.

“We are still searching for the child’s body. At Circle Odorna, two people drowned and one body has been found. It is actually about five people that are confirmed dead. Where the Army pickup fell, another body was found aside the three people in the bucket of the pickup,” the PRO of NADMO, George Awusi told the station.

Several areas in Accra got flooded during the downpour. The Ghana Meteorological Agency (GMet) issued an earlier alert over the rains indicating that “a rainstorm at the southern portions of Togo is forecast to affect places in the southern half of the country.”

The rainstorm according to the Agency affected areas such as Kpetoe, Akatsi, Ho, Kpandu and its environs in the Volta Region.

In the Eastern Region, areas such as Koforidua, Begoro and Nkawkaw were also affected. Dodowa, Amasama, Afienya and many areas in Accra also experienced the downpour.

Last week, five people also lost their lives when Accra got flooded. The GMet has warned of more rains this year.