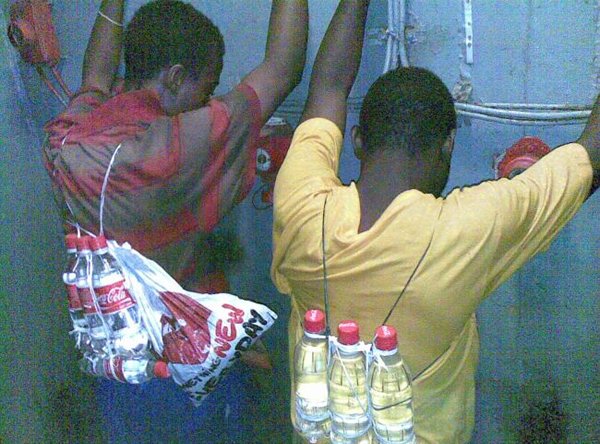 Five Ghanaians who attempted to travel illegally through La Cote D’Ivoire for greener pastures have been disembarked at the Tema Port.

The five had stowed away on board MSC Katyayni but were returned at the Port of Las Palmas, US, and brought back to West Africa.

“They were given to MV Dafina which brought them to the port of Tema on Tuesday at 1900 hours, “he said.

Sheik Barry informed that the five persons had been fishermen in Cote D’Ivoire since 2012  but decided to embark on such an expedition.

He said the said stowaways had been handed over to the Ghana Police Service.

Sheik Barry, who was also a maritime expert, warned of the growing sense of what he called ‘Sea Entrepreneurs’ who saw the concept of stowaway as a means of making cheap money.

He informed that this was so because such persons, even though were embarking on an illegality, were not considered as criminals but economic adventurers, and therefore international law required that they should be given money when they disembarked.

In this regard, Sheik Barry revealed that “Ghana gave a disembarking stowaway $250, Senegal $500, South Africa $1,000, etc., and so one could imagine how much they stood to gain should they go on multiple expenditures.”

According to him, a Sierra Leonean national, Amidu Sisay, 36, who was disembarked from MV SSI Invisible on 16th of November, 2019 at the Tema Port, indicating that he had attempted to stowaway 13 times and had disembarked at the Tema Port on two such occasions.

In educating the public about the dangers of the concept of stowaway, Sheik Barry indicated that globalization had expanded the scope of international trade which indirectly affected the maritime industry adding that, “So the shipping industry has expanded and the threat level has also gone up.”

He informed that stowaways had implications to the shipping industry because they created cost because vessels are charged for disembarking stowaways at ports.

In explaining why stowaways faced the threat of death at the high seas, Sheik said, “When the shipmaster doesn’t want to bear the cost of returning the stowaway, it means they would be tempted to throw you into the sea.”

He also spoke of the delay element of the concept of stowaway due to the fact that the vessels in contention had to bring the stowaways back to their source countries since most countries would not be interested in allowing them to disembark at their ports.

Sheik Barry assured  Ghanaians that the Tema Port was safe from activities of stowaways because the security forces were on the ground to ensure that such persons came nowhere near any vessel saying, “A situation which has accounted for a no record of stowaway at the Tema Port for the past two years.”