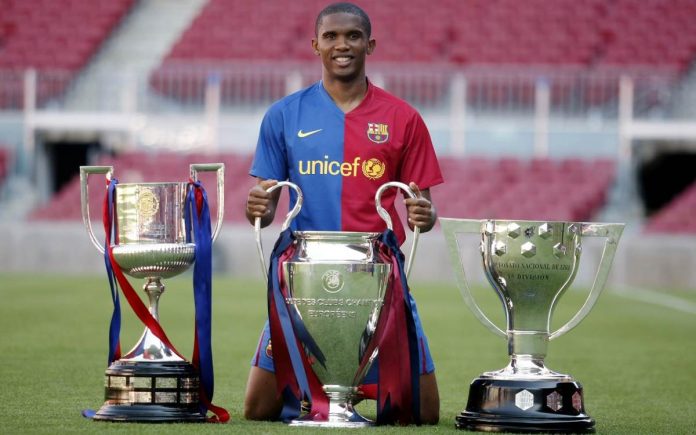 Samuel Eto’o Fils — the prolific African goalscorer who, in his prime, starred for European giants Barcelona, Inter Milan and Chelsea — announced his retirement from active football over the weekend in a social media post that also hinted at “a new challenge.”

As accomplished as Eto’o is, he occupies a high place in the pantheon of African football, and there exists a very popular opinion that perhaps he is the greatest of all the incredible footballers who have emerged from the continent, past and present.

Well, it is an opinion this writer certainly shares, for the following reasons:

Drogba was so good in his 20-year professional career that it almost felt like he had been around for much longer, but the Ivorian was a late bloomer who did not make his senior club debut until he turned 21. In contrast, a 21-year-old Eto’o already held gold from three major international tournaments (more on that soon) and was midway through a record-setting spell at Spanish outfit Real Mallorca. Oh, and need I add that Drogba’s career eventually lasted slightly (two years) shorter?

To Liberia’s footballer-turned-president belongs the distinction of being Africa’s only Ballon d’Or and World Best Player award winner, but not even the great man can hold a candle to Eto’o with regard to success in international football. Of course, it wasn’t Weah’s fault that he couldn’t drag the dim Lone Stars to more than two Africa Cup of Nations and the brink of a shock Fifa World Cup appearance — an overachievement, really, when you think of it — but Eto’o in Cameroon’s colours raised the bar higher than Weah and his little band of Liberians could ever reach. Eto’o won as many Afcons as Weah appeared at, finished second at another, owns Olympic gold, and played at four editions of the Mundial. Beat that, ‘King George’!

Eto’o and former Barcelona teammate Toure are the only men to win the African Player of the Year prize four times, with the latter especially celebrated for claiming his quartet consecutively. Still, though, Eto’o edges ahead — and it is not even a photo finish. By the time Toure reeled in his fourth, he only equaled a feat Eto’o had achieved some years prior, while the Cameroon legend appeared on the Fifa Player of the Year podium (in third place) a decade after Weah did. Then there is Eto’o being up there with only three others as players to have won the Uefa Champions League in successive years with different clubs — and the first to do so as part of back-to-back trebles.

For all Eto’o achieved at international level (he retires as his country’s all-time topscorer and most prolific player in Afcon history), he won’t be remembered as the most famous Cameroonian on the biggest of stages. That honour goes to Roger Milla, an Indomitable Lion of an earlier generation and a bona fide World Cup icon whose five goals (two more than Eto’o managed in his time) stood for decades as an African record. But while Milla crafted his legend on the back of memorable displays at a couple of World Cups, Eto’o has the advantage of a more illustrious club career, one that saw him play — and excel — for top sides in some of Europe’s biggest leagues. Milla, on the other hand, did play for some French clubs of good repute, but he isn’t too famous for any of those stints.

In the period Ghanaian Abedi Ayew shone, he shone bright; so bright that he drew comparisons with Pele, even sharing in the glory of the legendary Brazilian’s famous surname. But that peak period — the early nineties during which Ayew won three French league titles and the Uefa Champions League with Olympique Marseille, also inspiring Ghana to a Cup of Nations final — was far too short for a talent so dazzling. The mark Ayew made was lasting, yes, but it fades too early in any best-of-all-time debate. Compare and contrast with Eto’o — who operated at a consistently high and influential level for a considerable length of his career — and it’s easy to pick a winner for this particular round.

Ghana to save $480m yearly from commissioned Karpowership