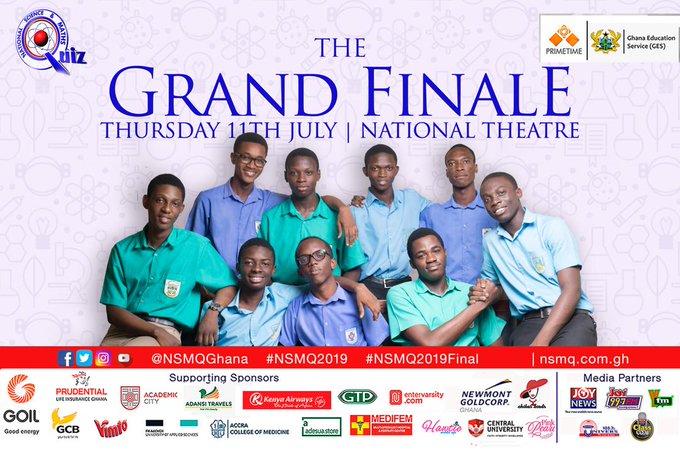 Seven years ago, the National Science and Maths Quiz (NSMQ) was not everyone’s cup of tea. The competition had just roused itself from a two-year slumber, but very few even noticed its absence. Ever since, however, the NSMQ — now in its 26th year — has grown in leaps and bounds, and is now one of the most anticipated events in the country. In 2017, it was even awarded the CIMG TV Programme of the Year prize. Ahead of tomorrow’s final, Daily Mail GH analyzes the reasons behind the sudden transformation of the NSMQ’s fortunes.

With more schools (mostly those of a lower profile) now involved, the likelihood of the traditional elite being occasionally bruised in the heat of battle has also increased. The likes of Tepa SHS and Keta SHS – very good schools, but not exactly reckoned among the top bracket – advanced quite far this year, to illustrate. And while the title always ends up with the big boys, who doesn’t love a competition that throws up the prospect of a good old upset?

Over the years, the NSMQ has been — and indeed still is — popularly known as the ‘Brilla’, as a nod to its former long-standing headline sponsor, the ‘Brillant’ brand of soap distinct for its blue bar. Then came a time at the end of the noughties when, due to a lack of funds, even the brilliance of ‘Brillant’ could not prop the show up. Following its resurrection, however, the competition has been able to attract lucrative sponsorship, bringing aboard the likes of GCB Bank, GTP, Kenya Airways, oil and gas giants GOIL, and Newmont Goldcorp. The increased funding — reflected in the improved, handsome prizes — has breathed life anew into the NSMQ.

From only being a programme that, to the annoyance of many, occupied the state broadcaster’s Saturday morning TV slot for decades and appealed mostly to nerds, the NSMQ now has its own website, social media accounts (more on that shortly), and a following that could only be attributed to the sort of branding it never enjoyed before its brief hiatus. The NSMQ certainly holds its own now, on-air and on-screen, thanks in part to a multi-faceted face-lift. The organizers have taken it several notches higher in recent years, with the final held at Ghana’s iconic National Theatre, along with the addition of some exciting sideshows.

The NSMQ’s newfound popularity, without doubt, is mainly observed on social media. The show’s interactive social media accounts help in feeding the passion and interest of its 360,000-plus [Facebook] fans and 75,000-odd [Twitter] followers, while the added boost of streaming/broadcasting the event live has even more hooked. With old students buzzing with excitement on social media before and during contests — also celebrating victories and trolling opponents/rivals afterwards — the NSMQ lacks not the ability to captivate, even if only for a few weeks each year.

As Two Oak Trees Battle For Supremacy In A Forest

My downfall is the will of God – Ex-Ghana FA boss...

Ebusua Dwarfs 0-2 Asante Kotoko: Porcupines win on road ahead of...