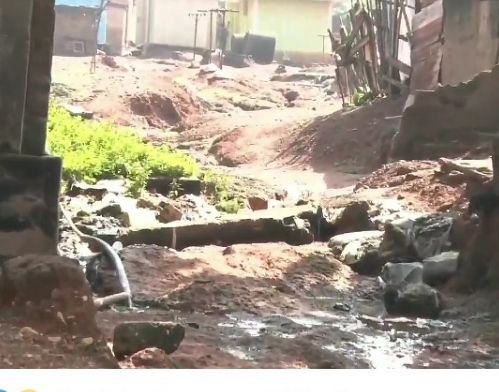 Residents of Moshie-Zongo in Kumasi have blamed poor drainage system as the major cause of recent flooding in the area.

Torrential downpour at the Kumasi suburb on Monday claimed the life of a 6-year-old girl after she was swept away by heavy floods.

The deceased,  Emmanuela Obey is the 12th victim to have died from the major incident in the Ashanti Region within one-and-half month, the National Disaster Management Organization (NADMO) said on Tuesday.

NADMO said houses in the area were also submerged as rain-swollen rivers burst their banks —forcing residents to flee their homes for safety.

One of them, who only identified himself as Mr Acquah has lived in the area for about 20-years.

He is seen scooping up water from his bedroom after he was sacked by flood waters. He told DailyMailGh that he fled with his family to another neighbourhood for safety.

Mr Acquah says authorities have failed to improve the drainage situation in the area.

“We suffer when it rains. This year’s incident is worse. We are pleading with authorities to save us. The worse will happen if the drains are not fixed”, said Mr Acquah who also wants unauthorized structures in the area demolished.

“We live closer to a stream. Because people are erecting structures here things have gotten worse. Owners of these buildings have diverted the course of the river. We are appealing to the government to come to our aid”, another resident said.

Located within the Manhyia North Constituency, this is not the first time the low lying area has experienced a major flooding.

Member of Parliament for the area, Collins Owusu Amankwah is blaming the continuous flooding in his constituency on failure of the Assembly to enforce bye-laws.

Mr Amankwah maintained that it is the responsibility of the Assembly to decongest areas in the metropolis deemed flood-prone areas to avoid such needless deaths.

“I’m very sad because it is obvious the Assemblies are not enforcing the laws,” he told Accra-based Adom FM.

The Manhyia North MP also blamed residents for the indiscriminate citing of structures and choked gutters for the perennial floods.

Mr Amankwah said the flooding situation would only stop if the Assembly takes steps to ensure proper citing of structures.

Monday rains in parts of Ghana including the capital Accra was severe.

Earlier in October, at least 28 persons were killed in the Upper East Region.