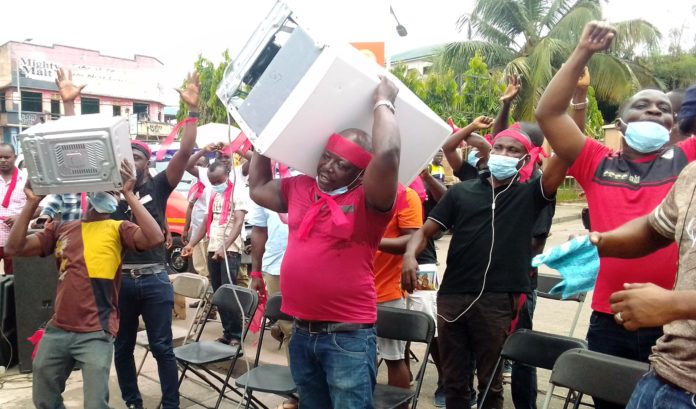 Dealers in the sale of used fridges in Kumasi have threatened to hit the streets if the government fails to lift the ban on the importation and sale of used refrigerators in Ghana.

According to the Ghana Association of Importers and Sellers of Used Fridges (GAISUR), its members numbering over 100,000 have been jobless since the ban took effect in January 2013.

At a press conference in Kumasi on Monday, October 19, 2020, the group said a decision by the government to establish a Refrigerator Assembly Plant as an alternative means of livelihood for affected members is yet to be fulfilled –nearly a decade after the law was enforced.

Secretary of the Kumasi branch of GAISUR, Henry Boadi who addressed the media accused the government of deceit adding that their members feel betrayed.

“The Energy Commission (EC) and the Environmental Protection Agency (EPA) confirmed the idea when per a letter dated October 16, 2012, a consultant was contracted to draw up a 5-year business plan for the establishment of a Refrigeration Assembly Plant.

Unfortunately, 10 years since the announcement of the ban on August 30, 2010, the lives of members have never been the same. There’s a current feeling of apprehension, frustration, and betrayal”, Henry Boadi said.

Despite the assembly plant not having been established, he said, their plight has worsened as goods get seized by customs officials at the port.

“When our fridges fitted with the R600A and R134A compressors are Imported, they are seized by customs officials at the port which is frustrating and has rendered most of us jobless”.

What we are asking the government is, if they are not able to honour their promises they should allow us to do business”, Henry further stated.

In 2008, a ban was placed on the importation of second-hand refrigerators to help reduce wasting the national grid due to the high consumption levels of those products that had expired and were meant to be recycled in their countries of origin but are imported into the country for sale.

However, due to pleas by the dealers that they had already imported goods before the ban and that they needed time to sell off their goods, then-President John Agyekum Kufuor gave a two-year grace period.

After the grace period, in 2010, the newly elected President John Evans Atta Mills also gave a two-year grace period on the request of the dealers, which ended in 2012, by which time Mr. John Dramani Mahama had taken over as President following the demise of his predecessor.

The dealers made a similar request in 2012, but President Mahama granted them six months because they had enjoyed four years of grace period already, which made the ban come into full force in 2013.