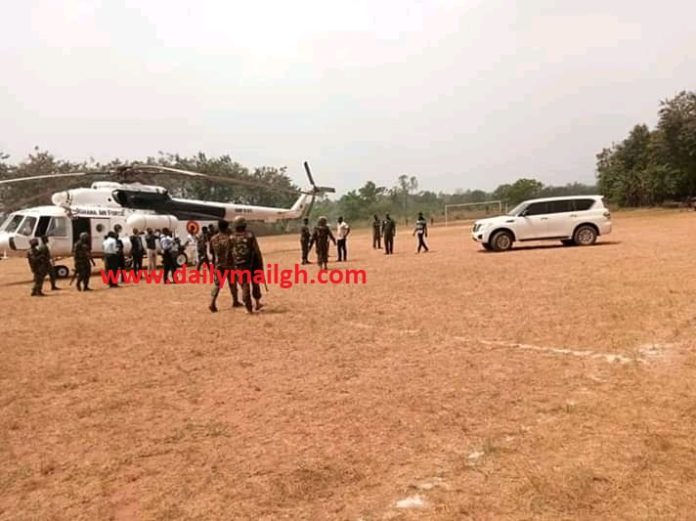 A swoop on Monday dawn picked up 20 young persons including a lady, said to be receiving military training by the secessionist group, Homeland Study Group Foundation (HSGF).

The suspects were arrested in the thickets between Kpeve and Fievue near Dzodze in the Ketu North Municipality of the Volta Region, the Ghana News Agency reported.

The leader of the group who is yet to be identified, had absconded upon sensing danger when the military team invaded the camp at about 3:00am on Monday, local media reported.

Upon interrogation, the arrested persons confessed they were deceived to be enlisted into the Military and charged an entrance fee of GhC800.00, only to be brought to the said location for training.

It is gathered that the mind behind the camp and training of these people might have some military background considering the sighting and set up of the camp.

Authorities are yet to brief the media with full details about the development.

In December 2019, the Homeland Study Group Foundation (HSGF) allegedly unveiled its defense force numbering about 2000 as it aims at weaning itself from Ghana to form an independent state.

The HSGF has declared the south-eastern parts of Ghana an independent state under the umbrella – Western Togoland. However, the Akufo-Addo government has rubbished the claim, assuring citizens the security agencies will crush the group since Ghana remains a sovereign state.

In December last year, DailyMailGH obtained a video from sources within the HSGF circles revealing that it has allegedly trained men and women to defend the new territory at an unknown location, backing it with pictures and videos.

According to insiders, there was a passing out ceremony for the forces on December 14 after they underwent some guerrilla warfare tactics among others.

Since last year, close to 50 of the group have been arrested and are standing trial on charges of treason at different courts across Ghana.

Dagbon will never forget Akufo-Addo, Bawumia for the peace we are...