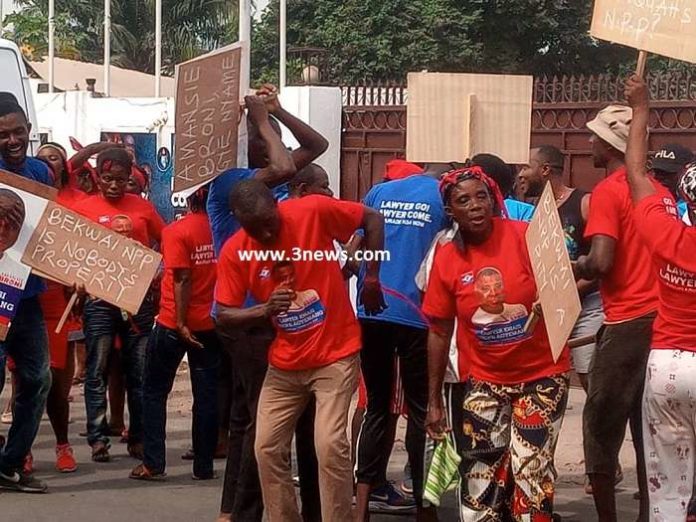 Some members of the ruling New Patriotic Party (NPP) from the Asante Bekwai Constituency in the Ashanti Region on Monday besieged the party’s headquarters demanding nomination forms for one of the aspirants, Kwesi Amofa-Agyemang.

The members are accusing the First Deputy Speaker of Parliament, Joseph Osei Owusu, of neglecting them, online portal, 3news.com reported.

According to them, regional and constituency executives of the party are frustrating Lawyer Kwesi Amofa-Agyemang by denying him the nomination forms.

“The NPP has opened nomination forms for anybody who is ready to contest. Lawyer Amofa who is aspirant had gone to Bekwai office for the forms but was denied. They did same to him at the regional office. So now we are here in Accra for the forms”, one of the protesters told Dailymailgh.

“If they deny him the forms and the deadline elapses Bekwai NPP should brace to face an independent candidate,” another party supporter said.

Mr Evans Nimarko, the party’s Director of Elections received the petition on behalf of the party.

He said their concerns will be forwarded for further action.

“I have contacted the aspirant. This is an internal election and we are guided by rules and regulations. Nobody can stampede the party when there are rules. At this stage we are managing the situation and so I have spoken to him to do the needful as discussed”, Mr Nimarko stressed.

Some aspirants are still facing challenges in getting access to the forms especially in the Ashanti Region, the party’s perceived stronghold.

The party will organise its parliamentary and presidential election on April 25, 2020.

It opened nominations on January 20, 2020 and will close the process on Thursday, February 20.

But some of the aspirants have complained that efforts to pick up nomination forms at the constituency and regional levels have been futile.

In the Weija Gbawe constituency, two of the aspirants have blamed the incumbent Member of Parliament who doubles as the Deputy Minister of Health, Tina Mensah of scheming to prevent them from having access to the nomination forms.

Some of the aspirants who spoke to Citi News shared their pain and disappointment.

One of the aspirants said “They should call that woman to order, the grounds are not good. They should give us the forms to fill and go to vetting and compete on a healthy ground and then we can unite and give the party what the party deserves”.

Another aspirant said “I will unseat her and she knows. Someone is taking the constituency as his or her father’s property or business which has been given to her and it is not something we feel as democratic as it should be”.

In the Suame constituency, a legal practitioner, John Darko who wants to unseat the incumbent MP and Majority Leader, Osei Kyei Mensah Bonsu who has been in Parliament since 1996, has been unsuccessful in picking the forms.

A group calling itself the Suame Home Support Movement earlier threatened to demonstrate against executives of the NPP in the constituency over the issue.

The group which comprises constituents, mostly supporters and sympathizers of the governing party said, such a move has the tendency to affect the fortunes of the NPP in the 2020 general elections.

Another aspirant in the Afigya Sekyere East Constituency aspirant, Oheneba Gyamfi, had also lamented the lack of positive feedback, in his quest to pick up the forms, after several petitions submitted to the constituency office.

Also, supporters of Albert Kan Dapaah Jnr, a parliamentary aspirant seeking to contest in the Party’s upcoming primary in the Ablekuma West Constituency, were stranded at the party’s constituency office on 27th January 2020 when they tried to pick up nomination forms for their preferred candidate. This was because the constituency chairman was not around.

The supporters claimed that the absence of the constituency chairman was part of a scheme to ensure that the incumbent Member of Parliament for the area, Ursula Owusu-Ekuful, goes unopposed in the upcoming primary.

The Speaker of Parliament, Prof. Aaron Mike Oquaye is advocating for the retention of high performing parliamentarians who have served for many years.

According to him, such persons have crucial roles to play in the nation’s development through the legislature.

He is, therefore, advocating for a regime where MPs would be encouraged by their various parties to stay in Parliament for longer periods.

“There is no sin in being seasoned- long-standing Mugabe. When you see Bagbin, Osei Kyei Mensah Bonsu and the others, you have to appreciate them rather. We are talking about performance, not just longevity by way of some rights but a person must perform. But merely being here for a long time is no sin at all,” he said.

The Speaker stressed that the work of Parliament is enriched when such long-serving MPs bring their knowledge and experience to bear on the House’s proceedings.

Conan O’Brien and Sam Richardson off to Ghana